Drop in aircraft observations could have impact on weather forecasts

One aspect of the COVID-19 pandemic has been a reduction in aircraft flights and thus of the aircraft-based observations available to weather prediction centres. The observations are used together with many others to help estimate the state of the Earth system at the start of forecasts.

At ECMWF, aircraft reports are second only to satellite data in their impact on forecasts. However, recently added satellite wind observations will help to mitigate the drop in the number of aircraft-based observations.

The image below shows how the number of aircraft-based observations over Europe received and used at ECMWF has evolved since the start of March.

Number of aircraft reports over Europe received and used at ECMWF per day. Some reports are not used because they are near-duplicates, and a small proportion are rejected as poor quality. By 23 March there was a reduction of 65% in reports received compared to 3 March. Globally the reduction was about 42%.

One of the main sources of aircraft-based observations (ABOs) in operational weather forecasting is the WMO’s Aircraft Meteorological Data Relay (AMDAR) programme. The following two charts illustrate how the reduction in flights has affected European AMDAR reports. 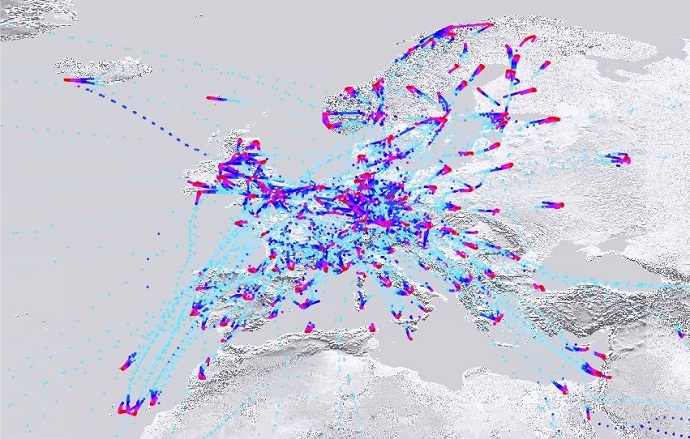 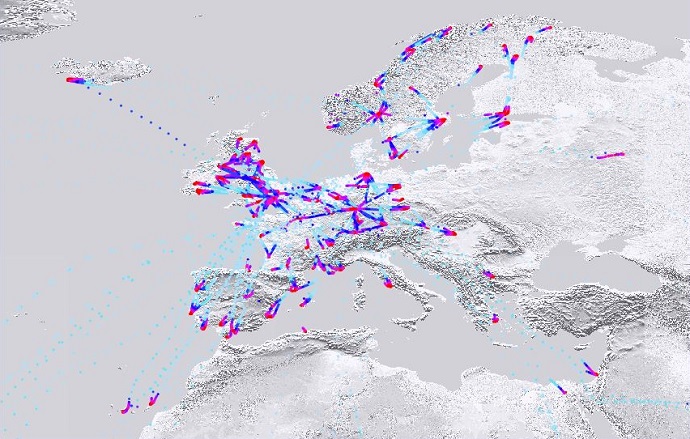 European AMDAR coverage for 2 March 2020 (top) and 23 March 2020 (bottom). Colours indicate the altitude, with red indicating low altitudes. There is a general reduction in report density, particularly over Italy and parts of Eastern Europe. (Figures courtesy of Stewart Taylor, EUMETNET)

To reduce costs, AMDAR reports may be switched off where there are already plenty of aircraft reports. This gives some resilience to the overall number of observations.

“The latest information available from airlines suggests that European AMDAR coverage will be reduced by 65% or more over the coming month, which is currently expected to continue into the summer,” says Steve Stringer, EUMETNET ABO Programme Manager.

The numbers and geographical coverage are also expected to be reduced elsewhere over the coming weeks.

“We are anticipating the substantial reduction in the availability of US AMDAR data to continue over the coming weeks, likely to generate some measure of impact on the output of our numerical weather prediction systems,” says Christopher Hill from the US National Oceanic and Atmospheric Administration (NOAA).

The Australian AMDAR programme has been normal up to now. “However, this is expected to change significantly soon, with Qantas suspending all international flights from the end of March and reducing Australian domestic flights by 60%,” says Douglas Body, from the Australian Bureau of Meteorology (BoM).

A small proportion of aircraft reports come from cargo flights, which are less affected than passenger flights.

The impact of aircraft observations at ECMWF

As illustrated in the figure below, the largest impacts on forecasts are centred around 250–200 hPa (about 11–12 km in height), which is a typical aircraft cruising altitude. Geographically the largest impacts are in the northern hemisphere for both wind and temperature.

Impact of aircraft data on wind forecasts. The plots show the difference in vector wind root-mean-square (RMS) error between forecasts with and without aircraft observations, verified against ECMWF operational analyses (our best estimate of the state of the atmosphere based on all the available information). Yellow/red colours indicate worse forecasts without aircraft reports, and hatching indicates statistically significant differences at the 95% confidence level. The largest impacts are in the range up to 24-hours ahead, but a significant impact is seen in forecasts up to 7 days ahead.

As shown in the figure below, compared with radiosonde observations, 12-hour temperature forecasts in the northern hemisphere are more than 9% worse at cruise levels. 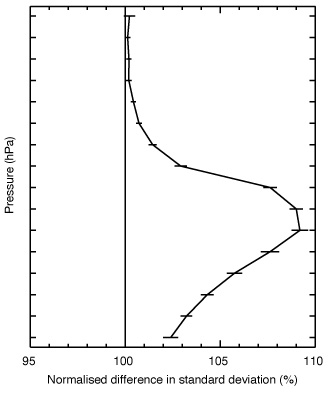 “Removing half the aircraft reports would be expected to give slightly less than half the impact of removing all aircraft,” says ECMWF scientist Bruce Ingleby.

One estimate of how important different observations are is provided by the FSOI statistic (Forecast Sensitivity to Observation Impact). On this measure, aircraft observations provided 13% of the impact of all observations used at ECMWF averaged over 2019. About two thirds of this comes from aircraft wind observations.

In summary, the number of aircraft observations has gone down significantly over the last couple of weeks both over Europe and globally. In the coming days and weeks, we expect a further decrease in numbers, which will have some impact on forecast quality in the short range, particularly around the polar jet stream level (10–12 km altitude).

Sensitivity studies at ECMWF have shown that removing all aircraft data degrades the short-range wind and temperature forecasts at those levels by up to 15%, with significant degradations at all forecast ranges up to seven days. There is a smaller, but still statistically significant, impact on near-surface fields, up to 3% on surface pressure.

Other types of observations are likely to be less affected by the COVID-19 disruption than aircraft reports, and there may be some additional radiosonde launches to try to mitigate the lack of aircraft data.

Satellite data provide a lot of information on temperature and humidity fields, but less on wind fields. In January 2020, ECMWF started using wind information from the Aeolus satellite.

“The Aeolus results demonstrate that there is still plenty of room to improve wind initial conditions,” says Lars Isaksen, the Head of the Actively Sensed Observations Group at ECMWF. “The Aeolus data will partly fill the gap due to fewer aircraft reports.”