Another important addition is a dealiasing algorithm for the velocity, that removes most of the typical dual PRF aliasing errors.

Unfortunately this time I haven't been able to create an executable on Linux, such that there is only support for Windows this time.

The most important changes are:

- The background map is now being tiled, in order to reduce the amount of memory that is required to display it. ­­

- Addition of a dealiasing algorithm for dual PRF velocity data. Use of the algorithm can be switched on/off by pressing SHIFT+V. More details about the algorithm are provided below.

- Radar data can now be hidden by pressing SHIFT+Z (and pressing it another time makes it visible again).

Here is some explanation of the dealiasing algorithm and the type of errors that it corrects:

Under the dual PRF scan technique different radials are scanned with a different PRF (pulse repetition frequency), usually named the low and high PRF, in order to increase the maximum velocity that can be detected by the radar (the Nyquist velocity). If the true velocities in 2 neighbouring radar bins differ by less than a particular threshold, then the velocity estimates obtained by this technique are correct (except if they exceed the new extended Nyquist velocity). If the difference exceeds the threshold, then the velocity estimates will differ by an integer multiple of a particular velocity from the true velocity. This particular velocity is (usually) twice the low/high Nyquist velocity that corresponds to the PRF under which the radial is scanned. These incorrect velocity estimates appear in a velocity image as speckles, or clustered areas in regions of high wind shear (where the true velocity different between neighbouring bins exceeds the threshold).

The dealiasing algorithm tries to correct these errors by first determining for each radar bin an average velocity in a particular window (by calculating a circular average, thus after first converting velocities to phases, in order to correctly deal with cases in which the true velocity also exceed the extended Nyquist velocity). Subsequently the velocity in that radar bin is compared to this average, and if it differs by more than the low/high Nyquist velocity, then that velocity is deemed to be aliased. If it is, then first the window-averaged velocity is recalculated, this time excluding velocities that are deemed to be aliased. A new estimate for the velocity in the aliased bin is now obtained by adding the integer multiple of (twice) the low/high Nyquist velocity that minimizes the difference between the new estimate and the window-averaged velocity.

This procedure is repeated for a particular number of iterations, which can be adjusted at the tab ‘Algorithms’ of the `Settings’. Applying the default of 5 iterations is almost always enough for convergence, but if your PC is not that fast, you might consider reducing the number of iterations, at the cost of (slightly) more remaining errors.

The low and high PRF for a particular scan are shown when pressing ALT+P.

Although the dealiasing usually leads to substantial improvement, it can in some cases (partly) remove important features like small mesocyclones. You should therefore always check the original data in order to determine whether the dealiased velocities are reliable. Checking vertical continuity of the (dealiased) velocity field can also be helpful. In the case of incorrectly dealiased velocities you could try to manually dealias them, by adding an integer multiple of (twice) the low/high Nyquist velocity to the displayed velocity.

As already indicated by some parentheses, for some radars there is a complication to the above story. For these radars the PRF gets changed halfway a radial, such that every radial is scanned by both the low and high PRF. This has the advantage that the true velocity difference between the part that is scanned by a low PRF and the part that is scanned by a high PRF is usually smaller, such that less aliasing occurs. In addition to that can the same Nyquist velocity now be used to correct all the radials, and it appears that this is always the low Nyquist velocity for the radars that are currently supported by NLradar. If you press ALT+P and see that the displayed low and high Nyquist velocity for your scan are equal, then you know that the PRF is changed halfway a radial.

There is still another complication however, and this one is problematic for dealiasing. For some radars can the correction terms take on all integer multiples of once the low Nyquist velocity, instead of twice the low Nyquist velocity. I don’t know the reason for this, but it is at least pretty problematic for dealiasing, as it means that the number of possible true velocities is doubled. It is the case for the old KNMI radars between about September 2011 and January 2014, and for the KMI radar in Jabbeke. With a low Nyquist velocity of only 12 kts for the lowest scans of the old KNMI radars, that means that errors in the dual PRF estimate can take on every integer multiple of 12 kts. This gives often way too many possibilities for correct dealiasing, and applying the algorithm leads in this case to oversmoothing of the velocity field. Especially in this case you need to be very careful here with interpreting the dealiased velocity field.

The installer for Windows can be found here:  https://drive.google.com/file/d/1ytMS1jIks3i7fQ2dQ1pBpbTOl2V-d4BB/view?usp=sharing

IMPORTANT: If the application crashes on startup, you probably need to run it as administrator!!!

And here is large number of example radar images where you see both the original and dealiased velocity field: 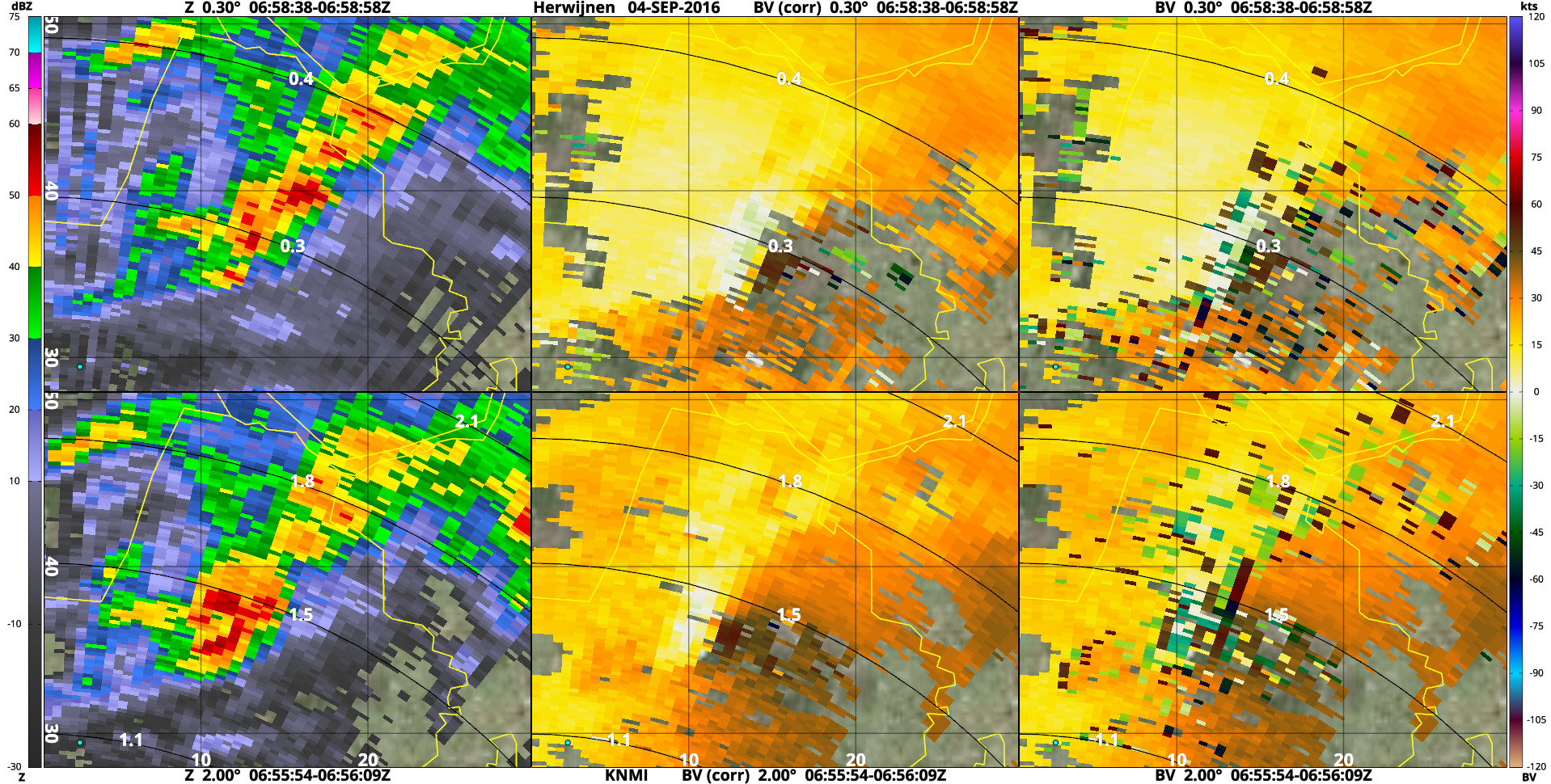 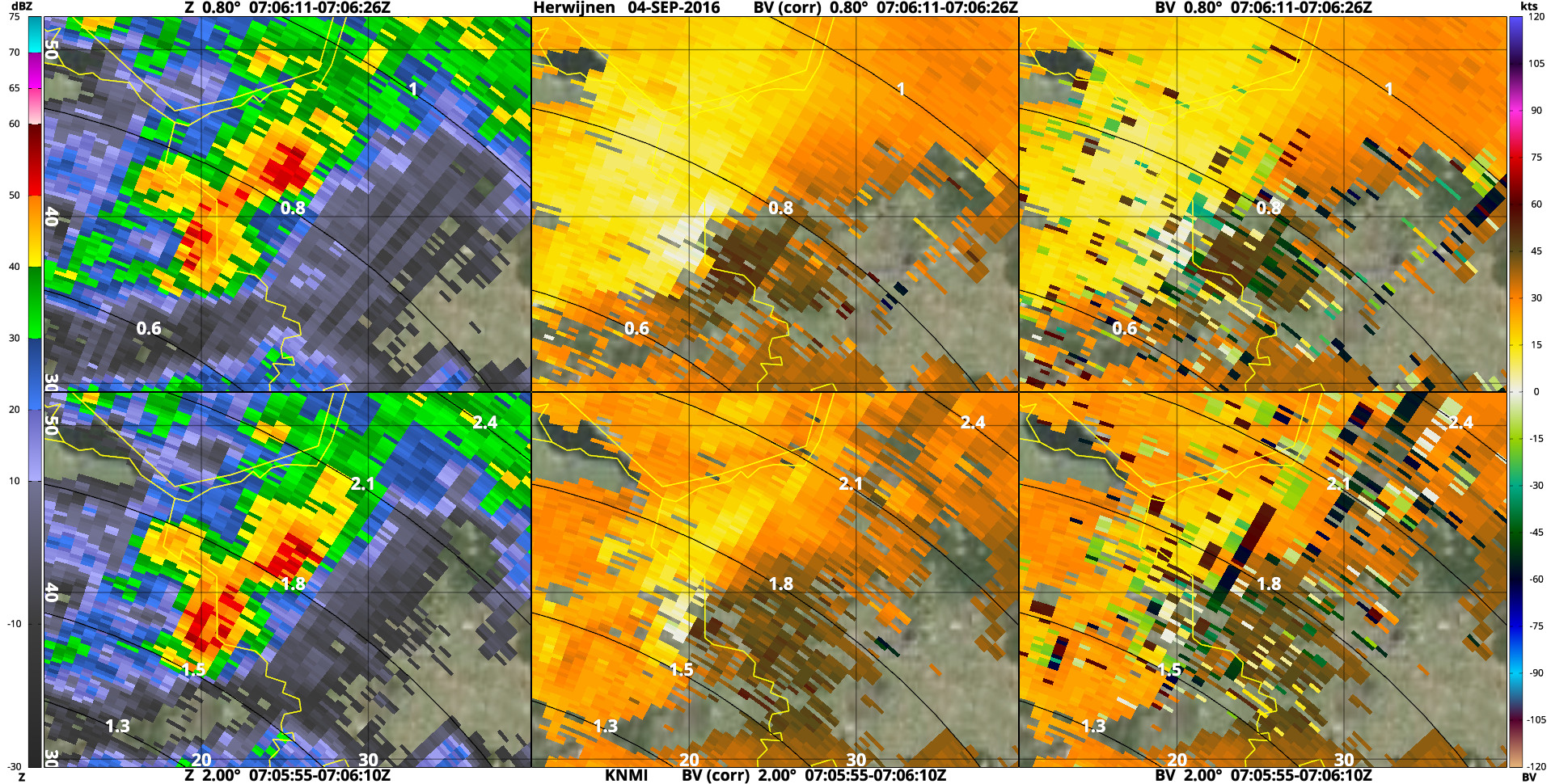 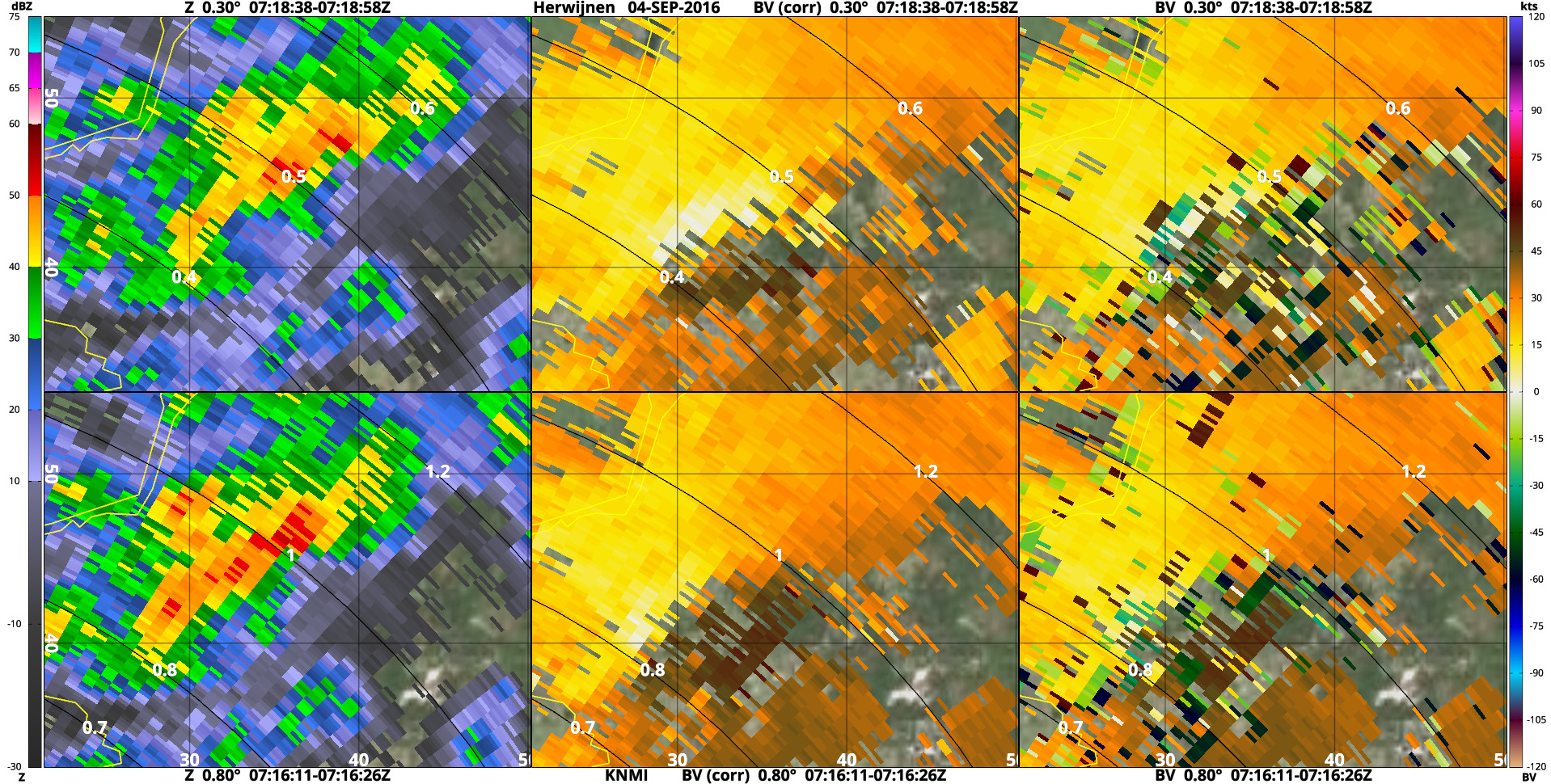 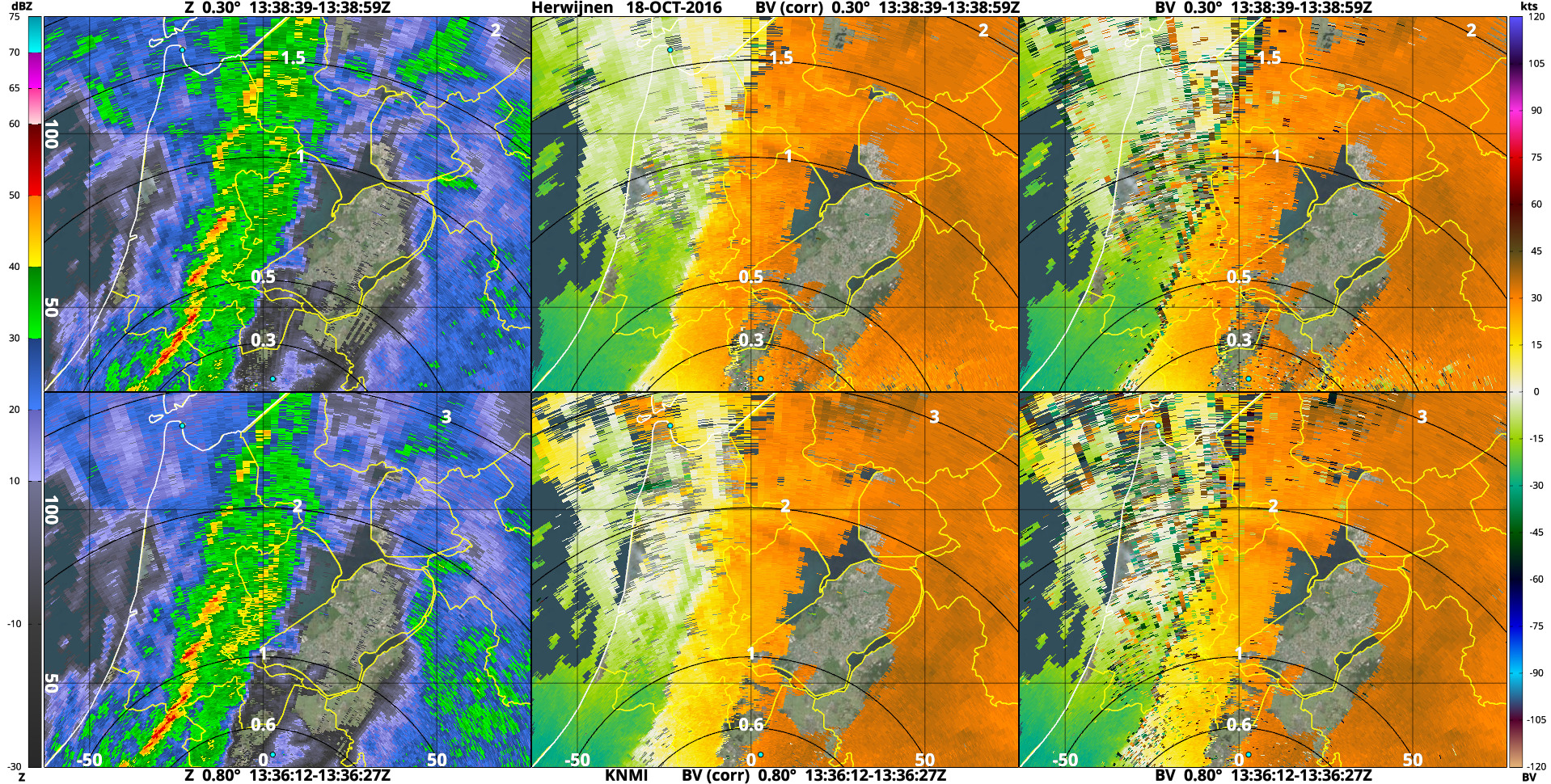 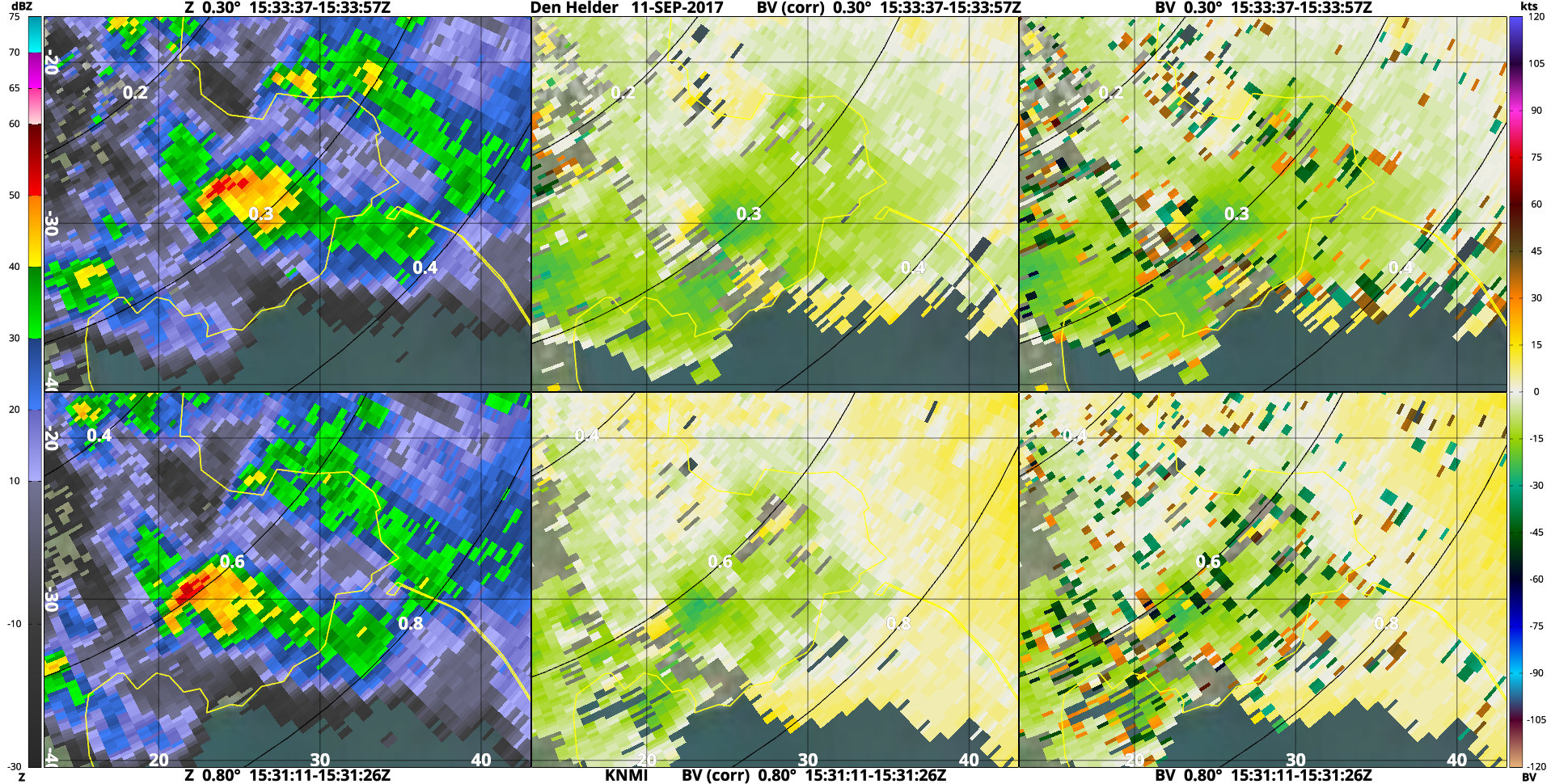 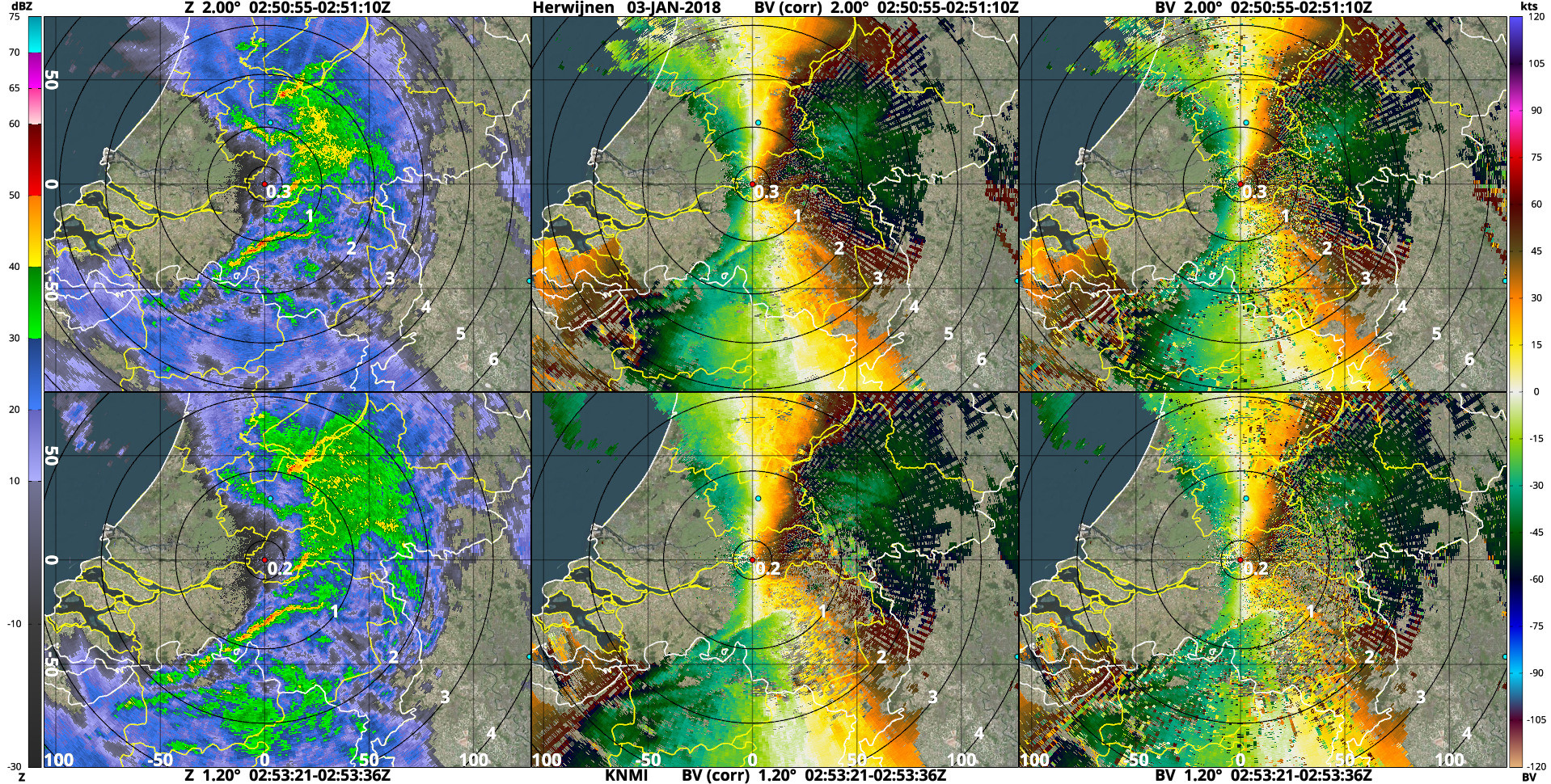 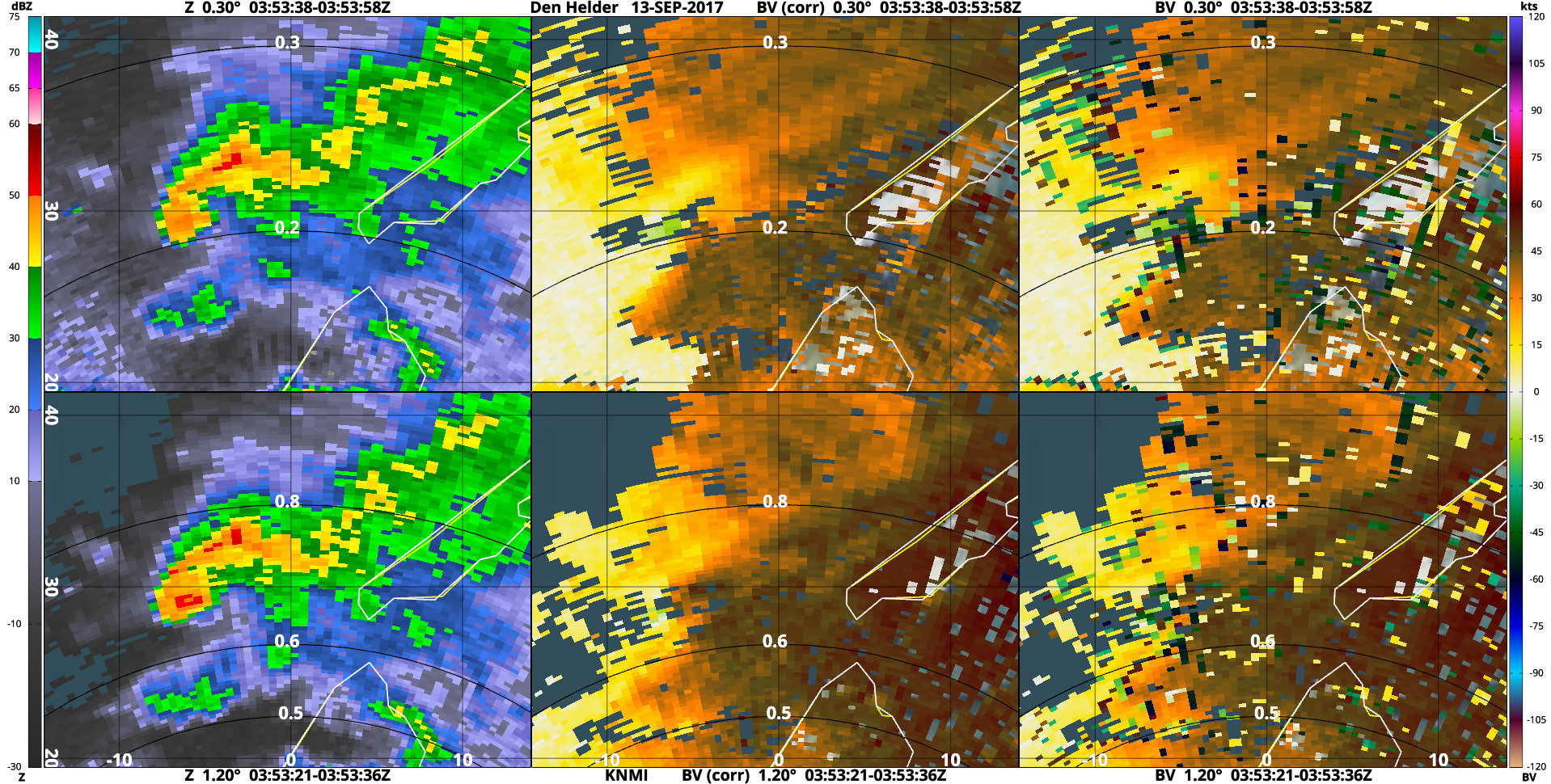 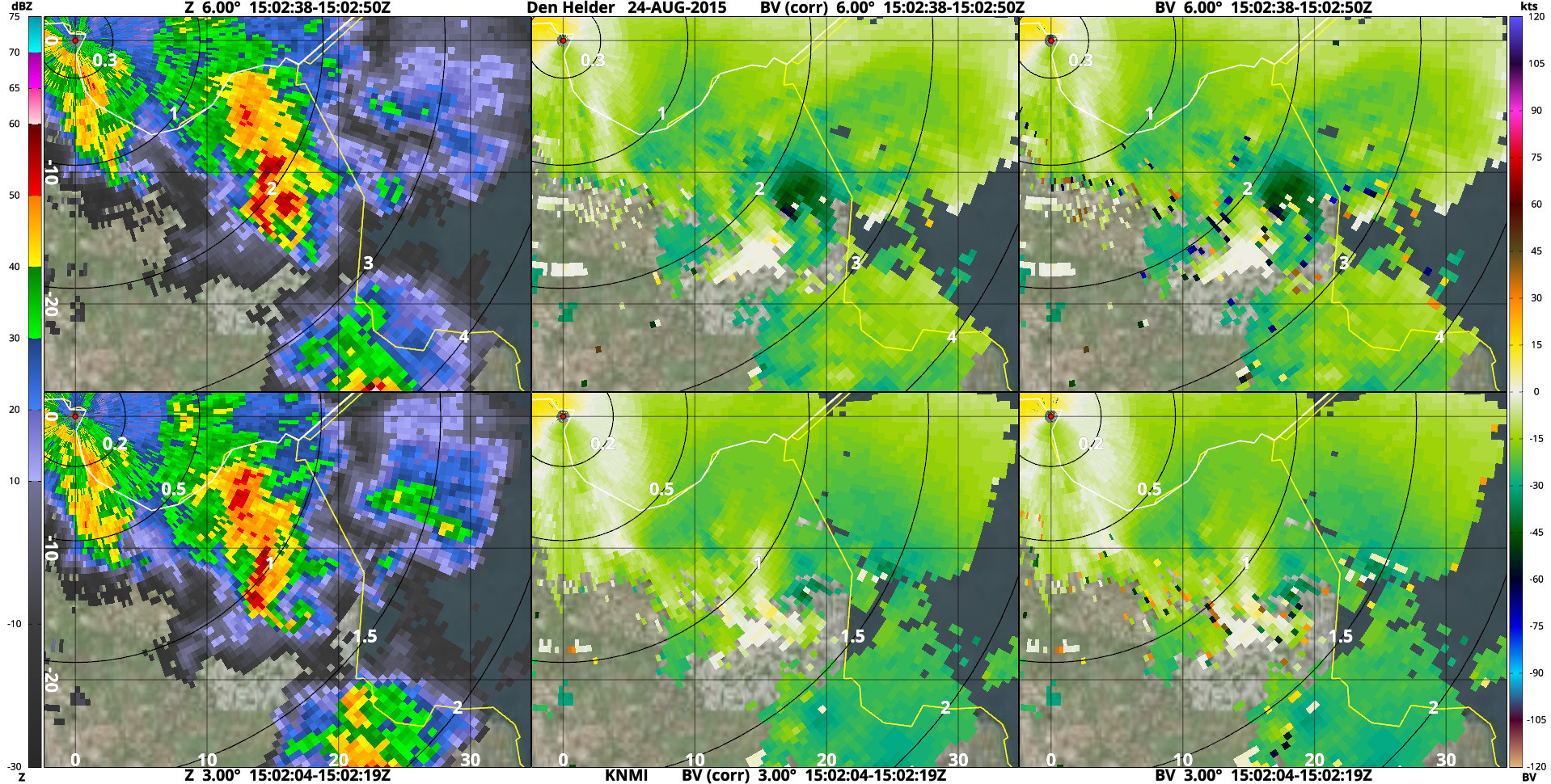 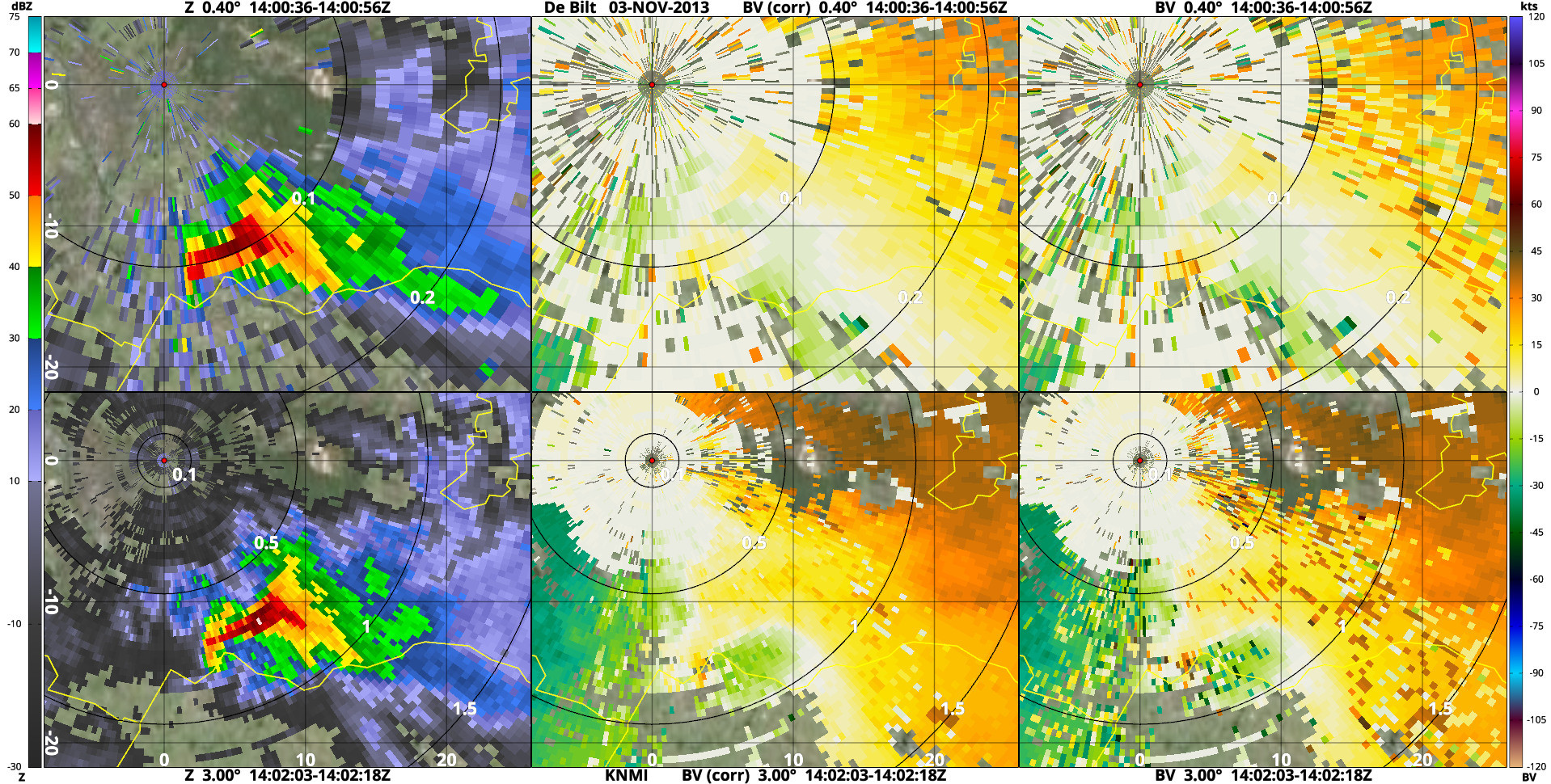 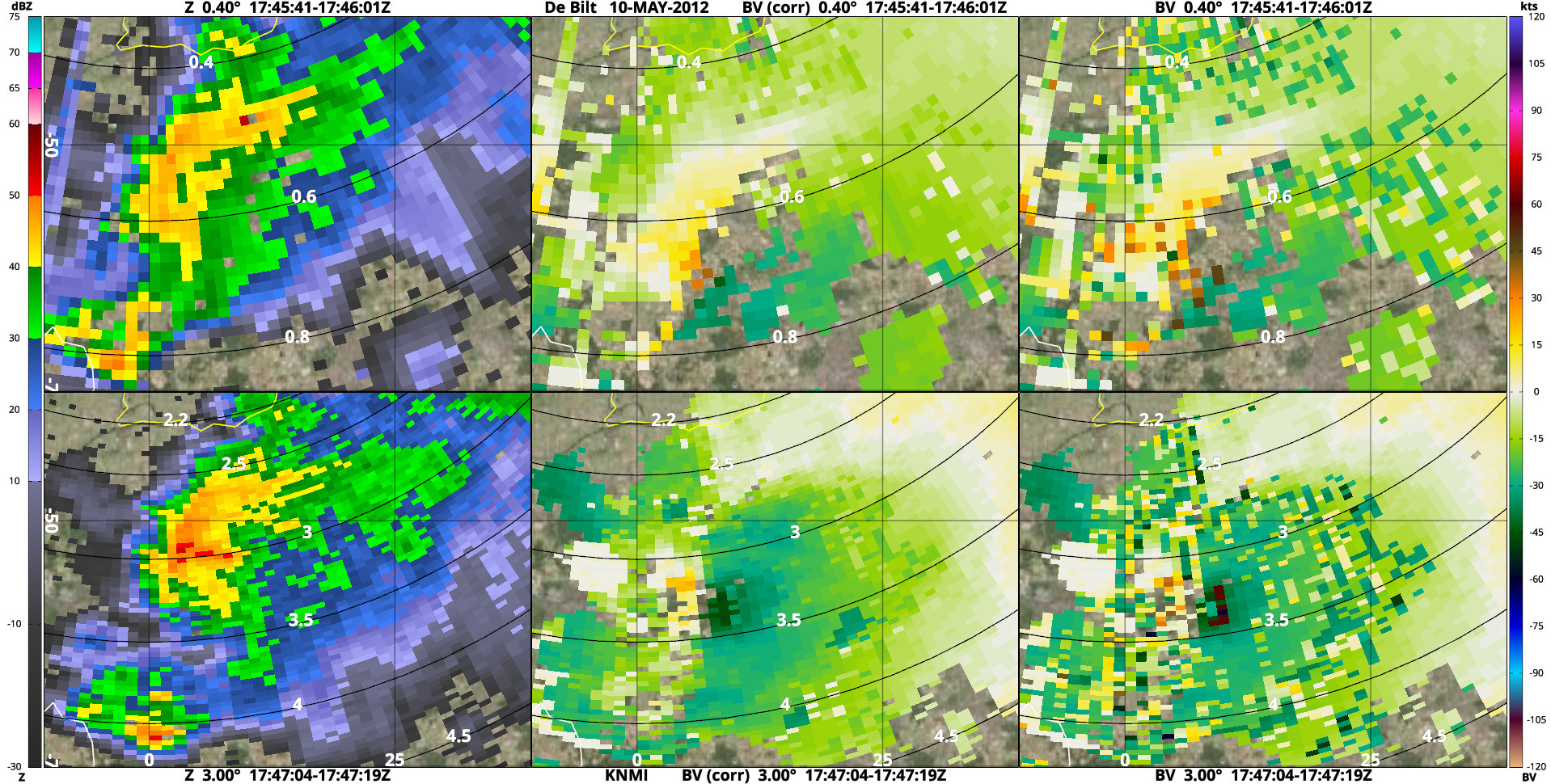 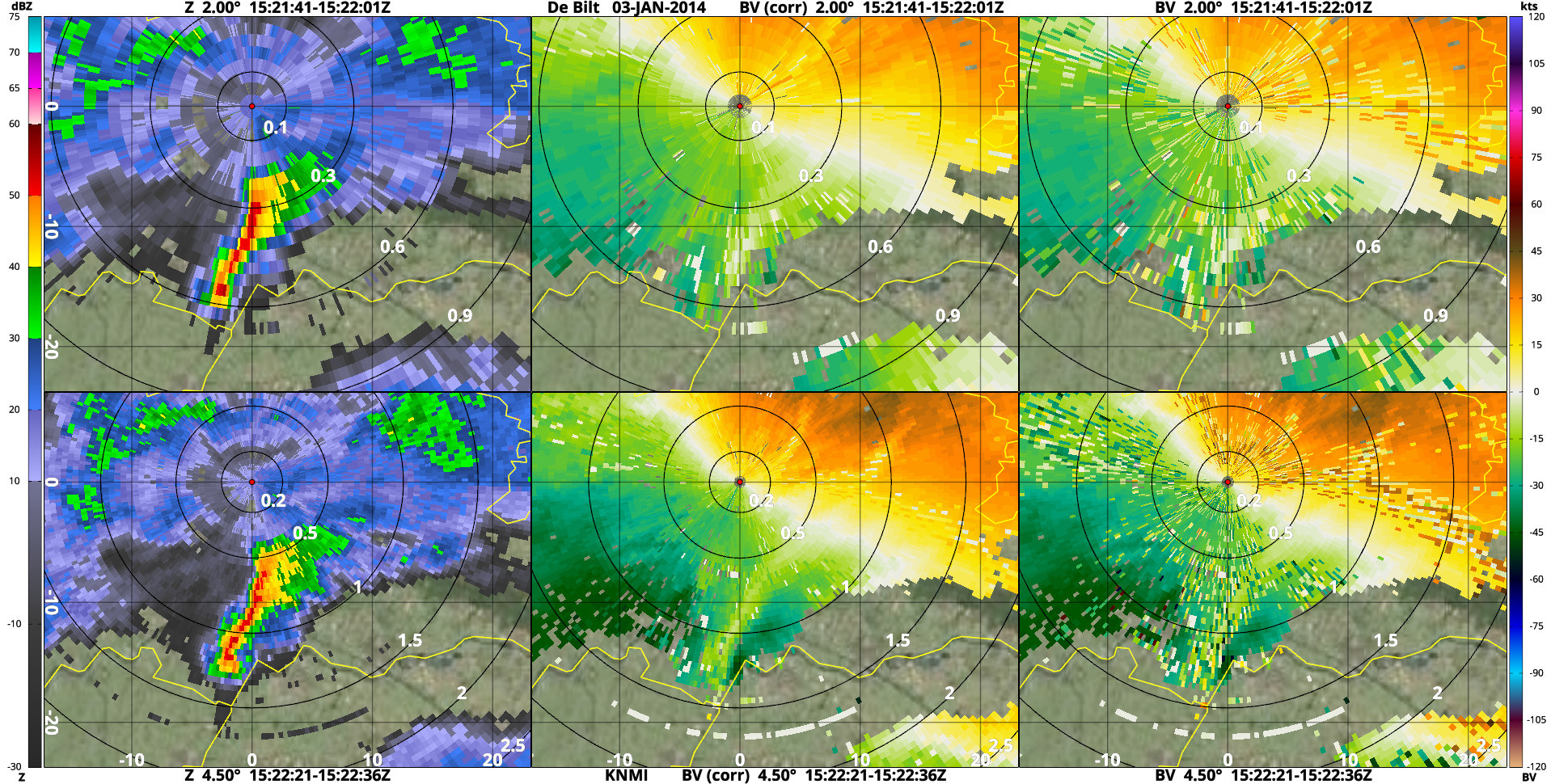 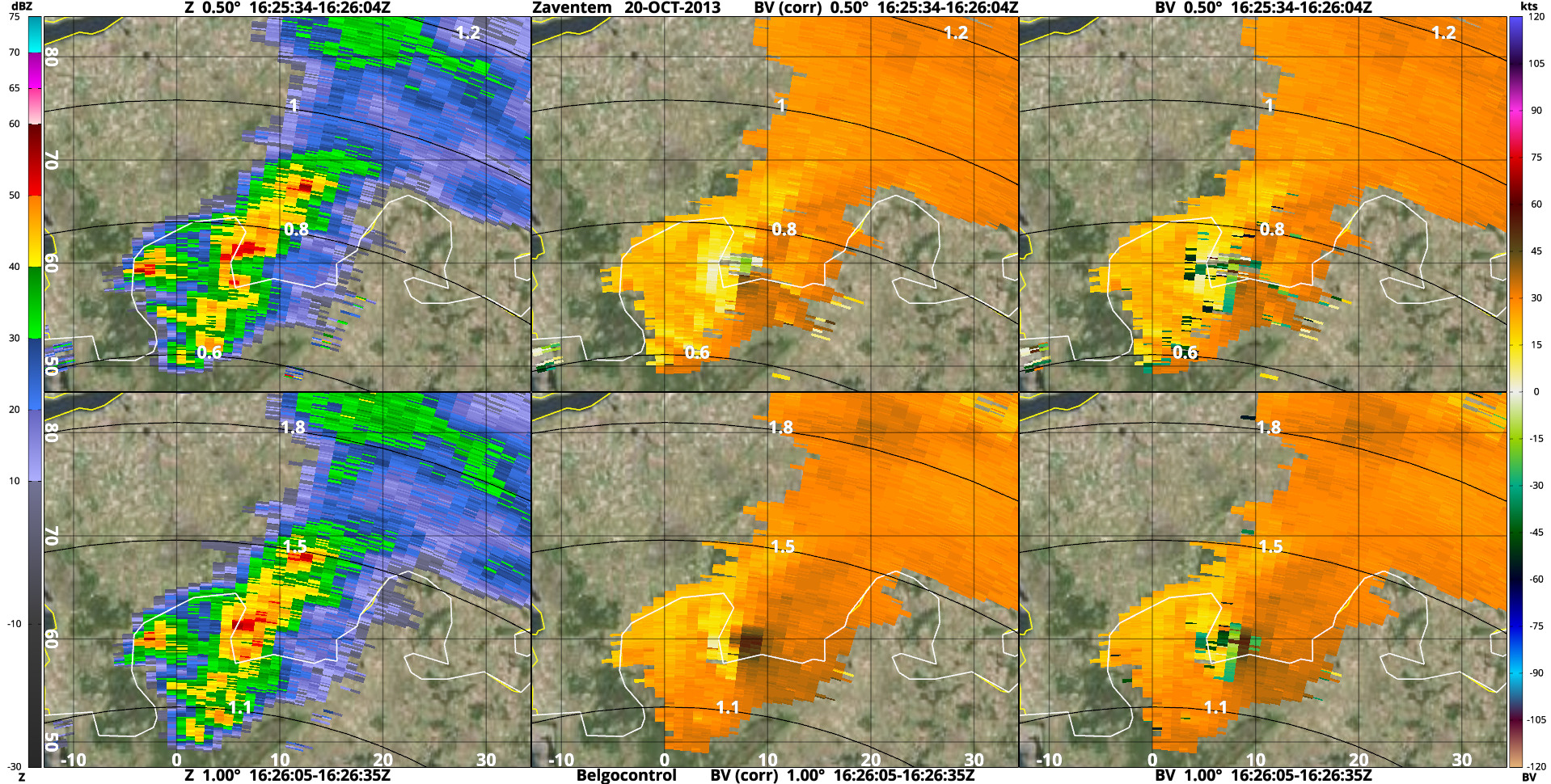 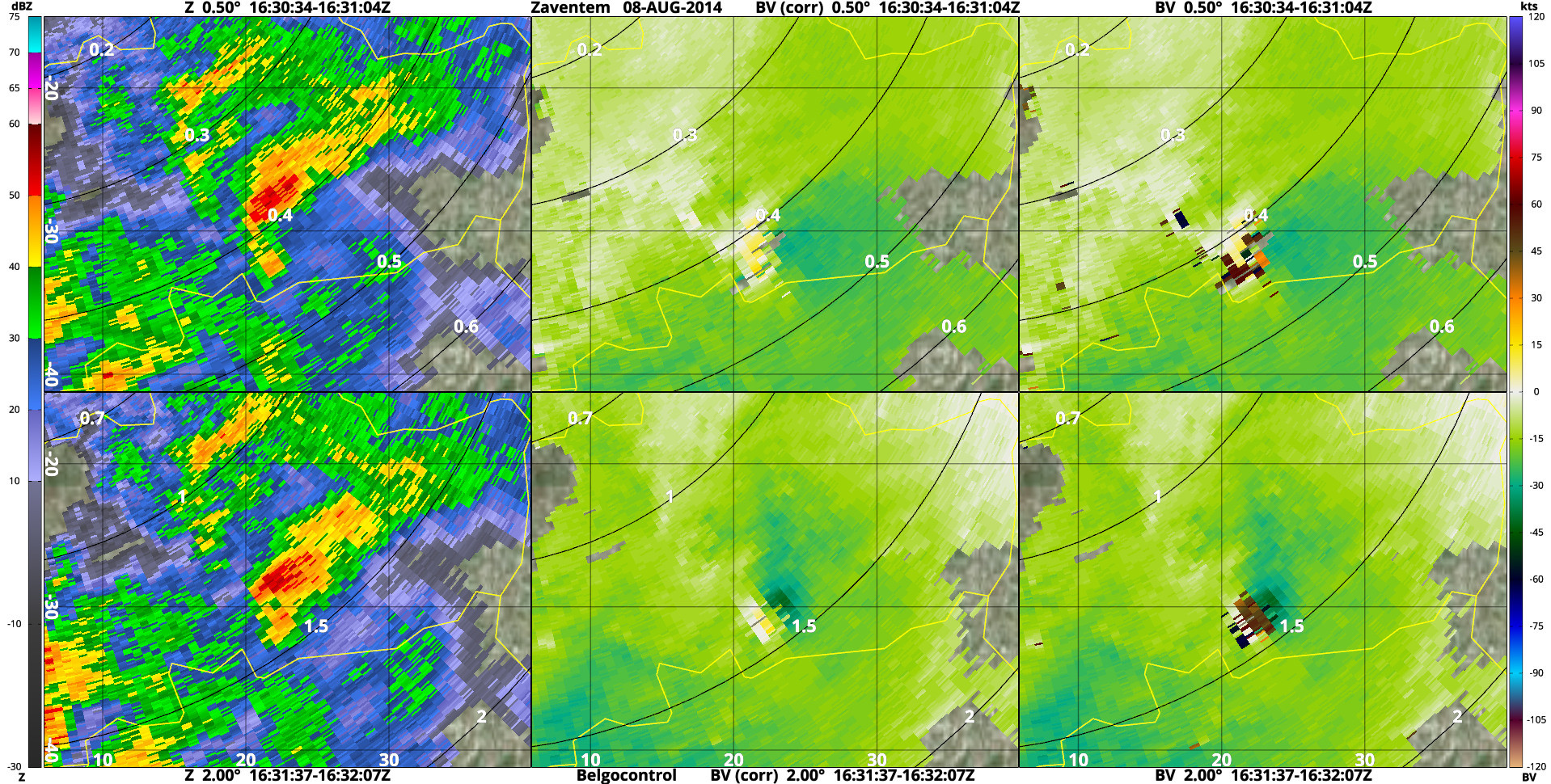 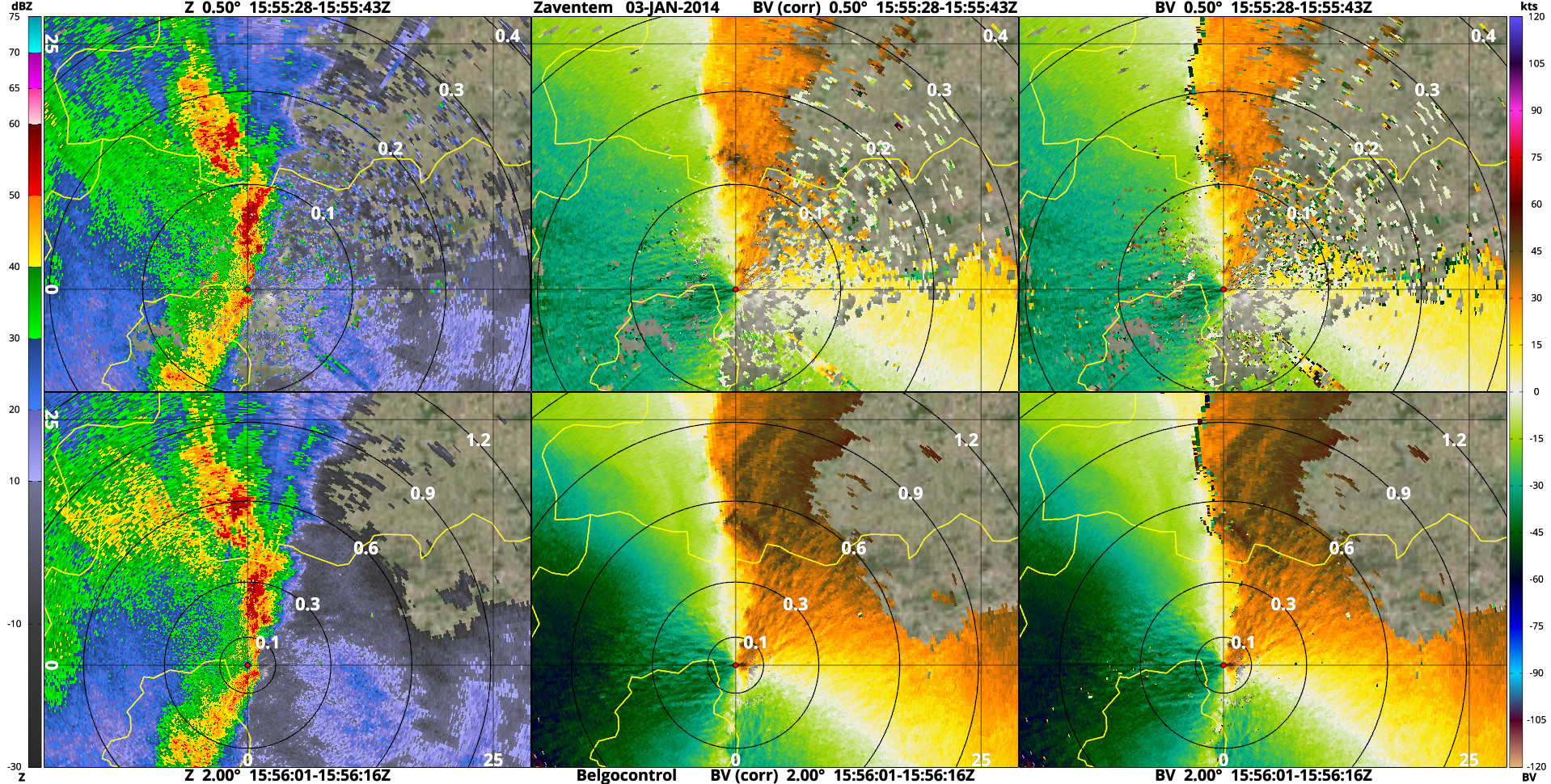 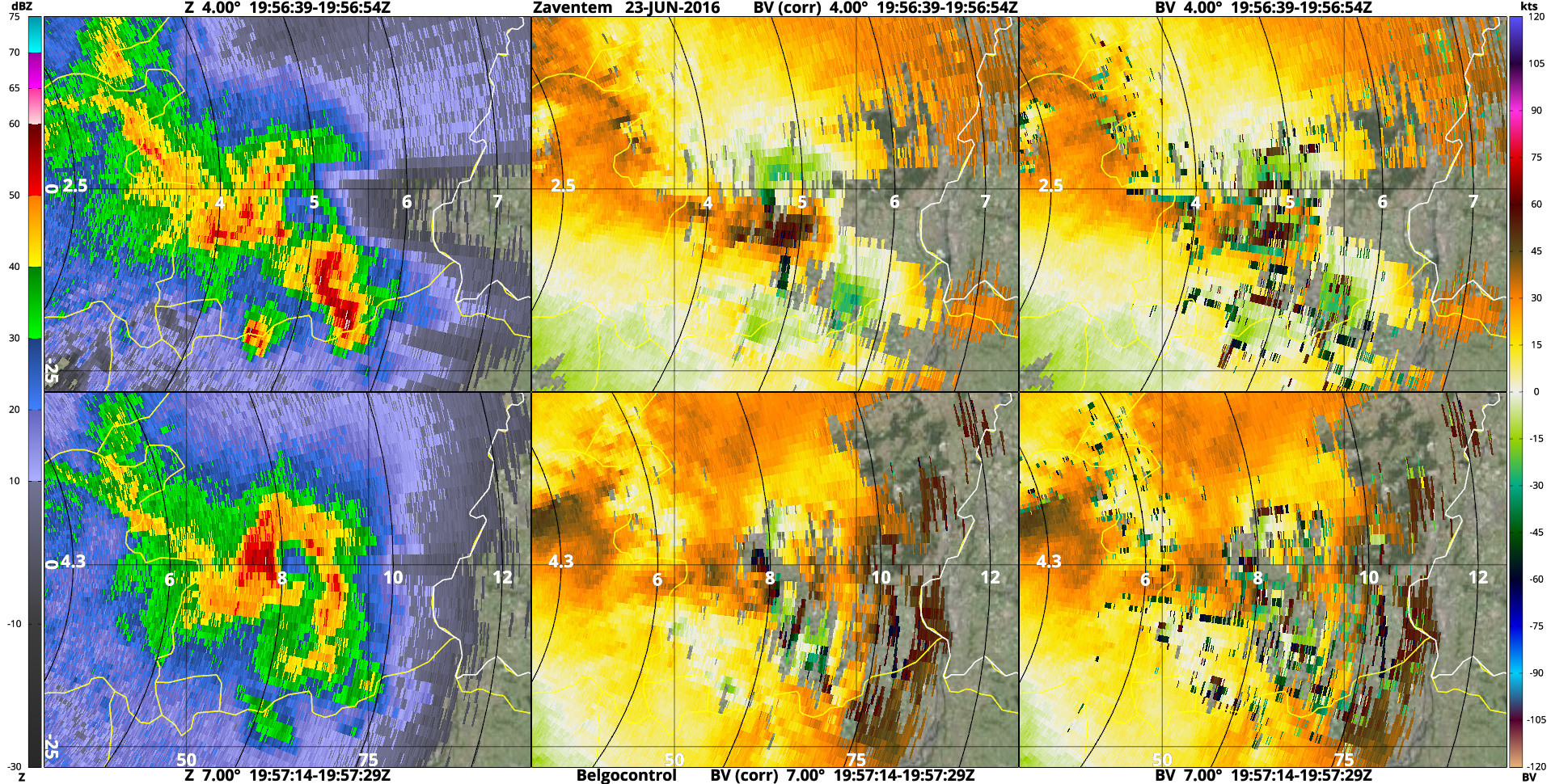 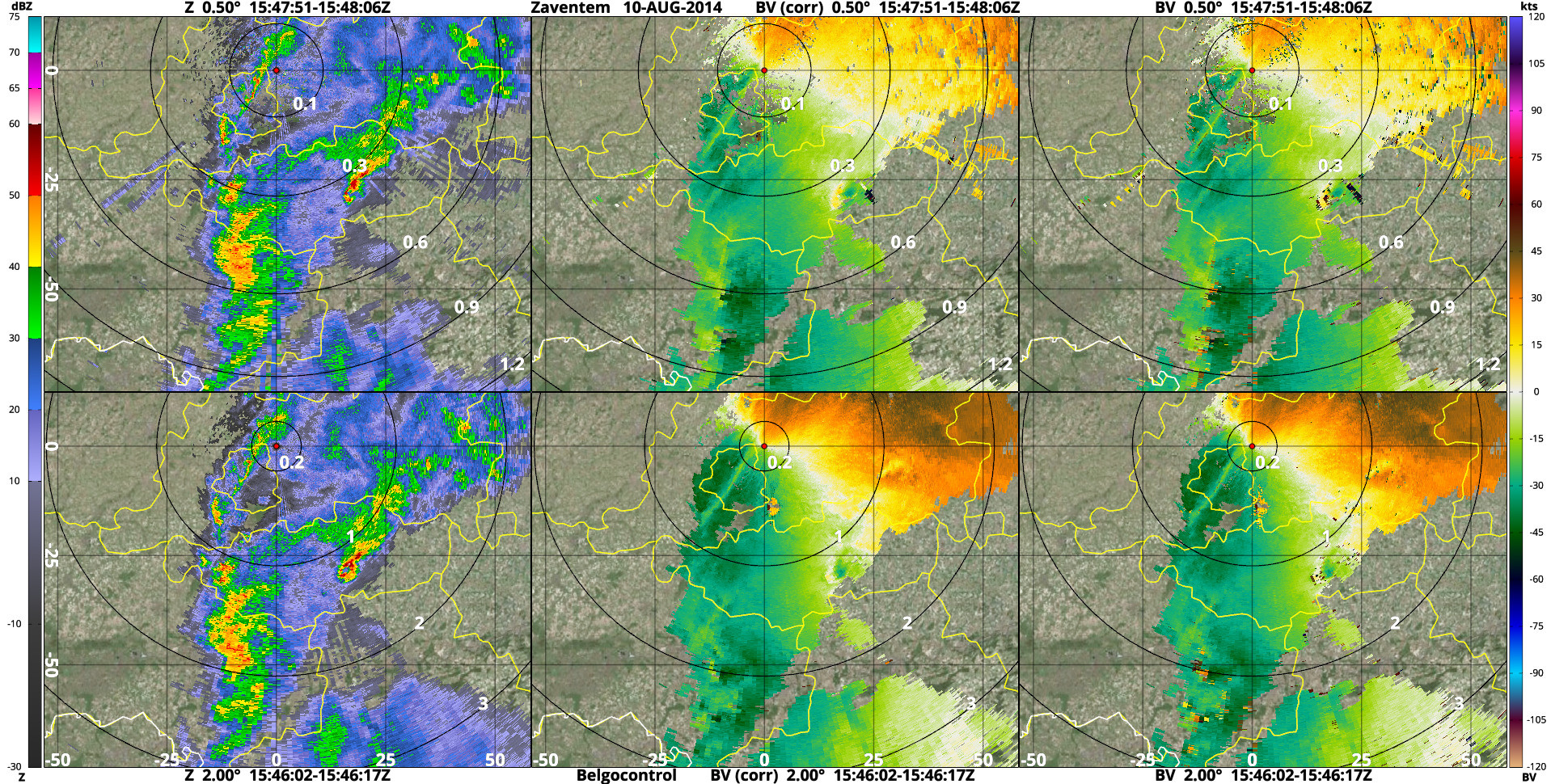 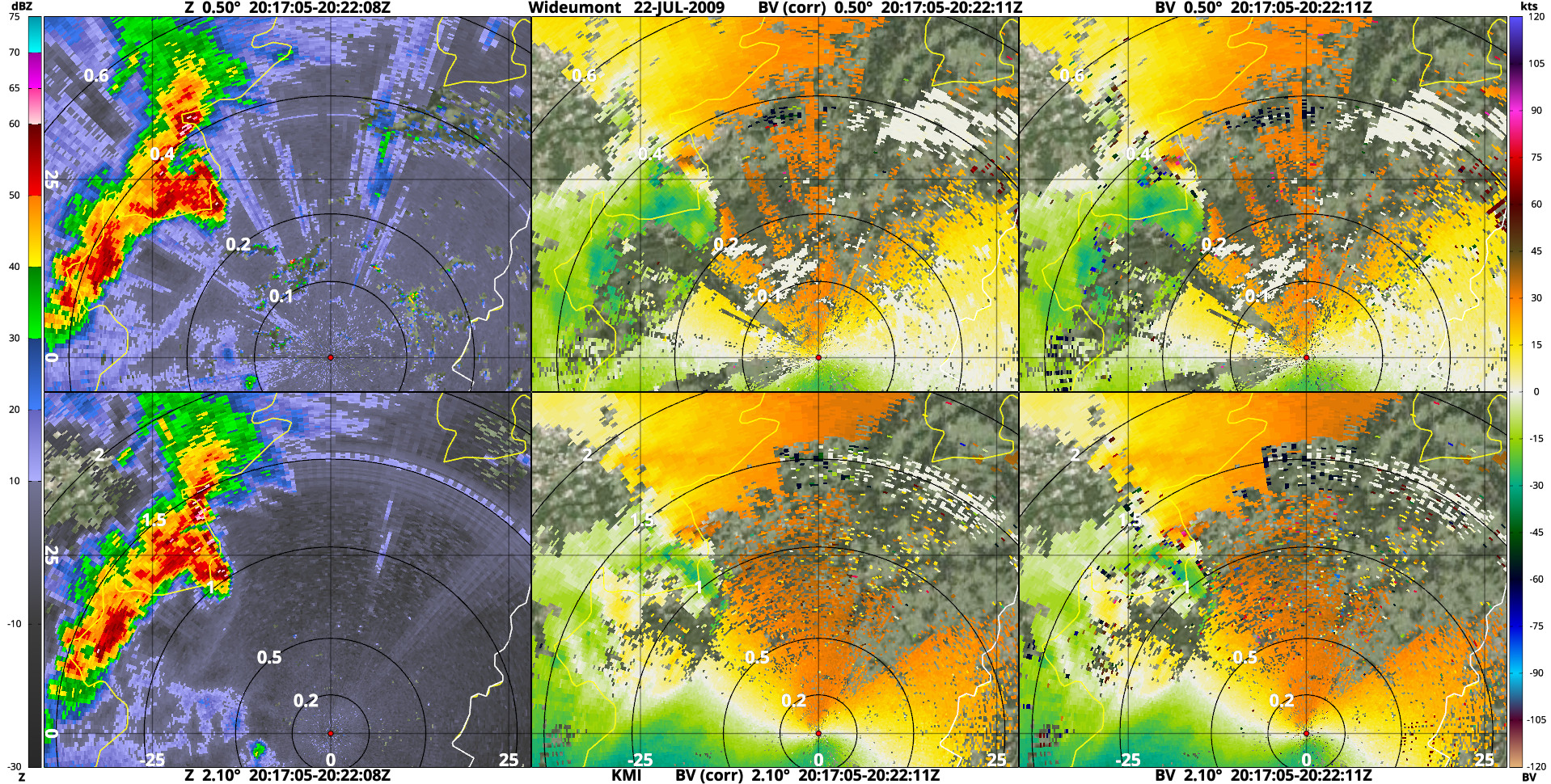 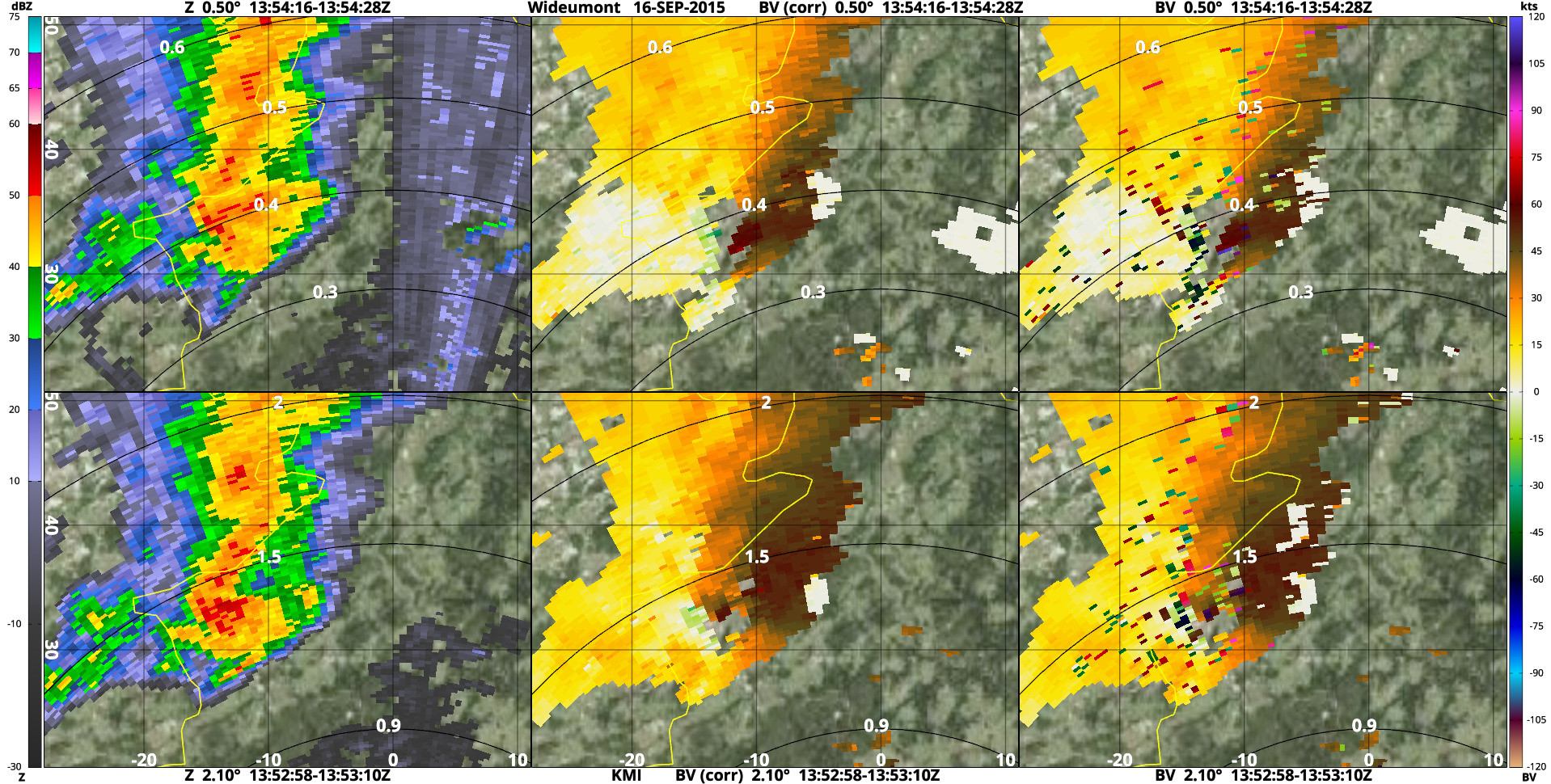 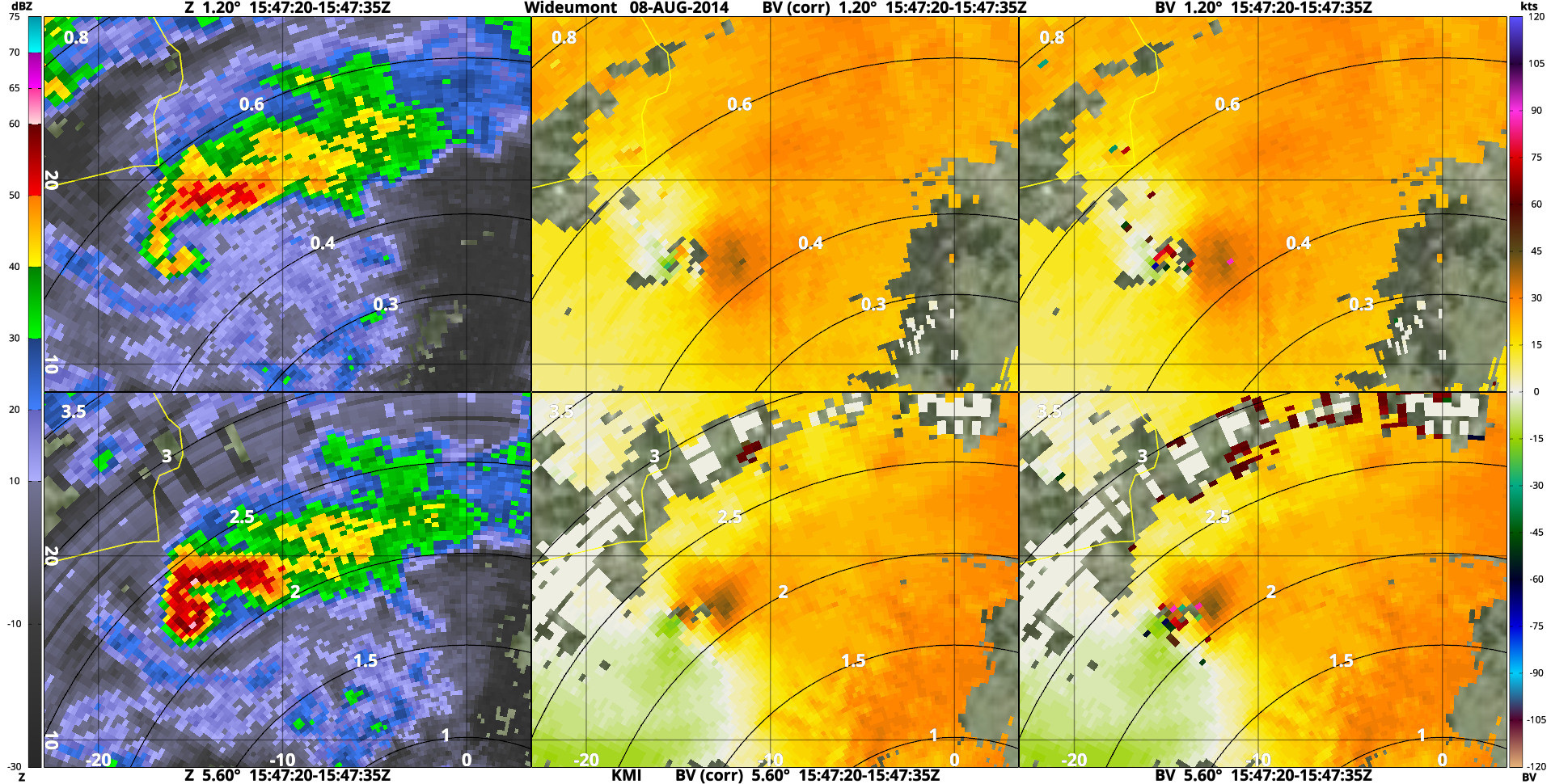 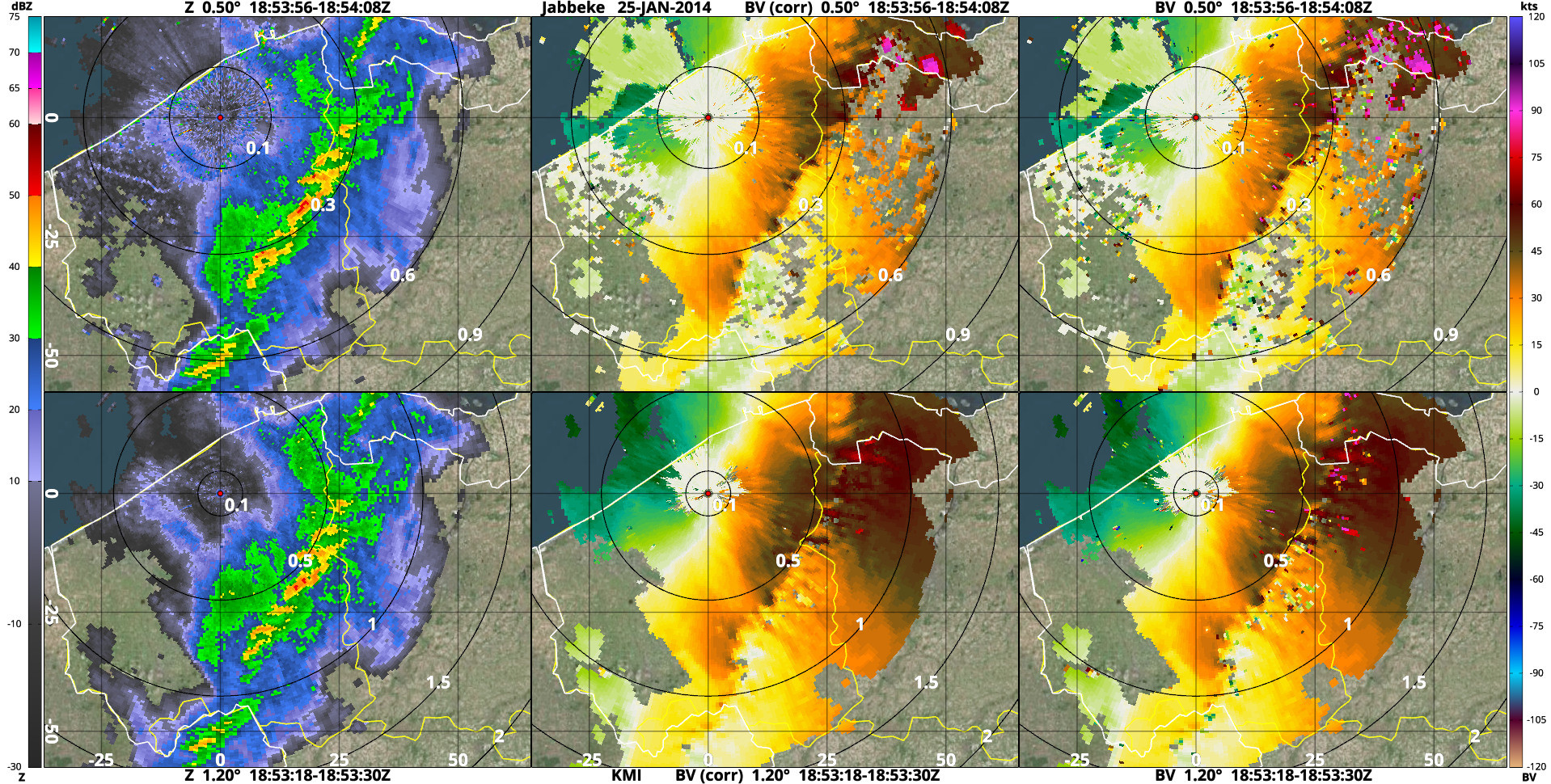 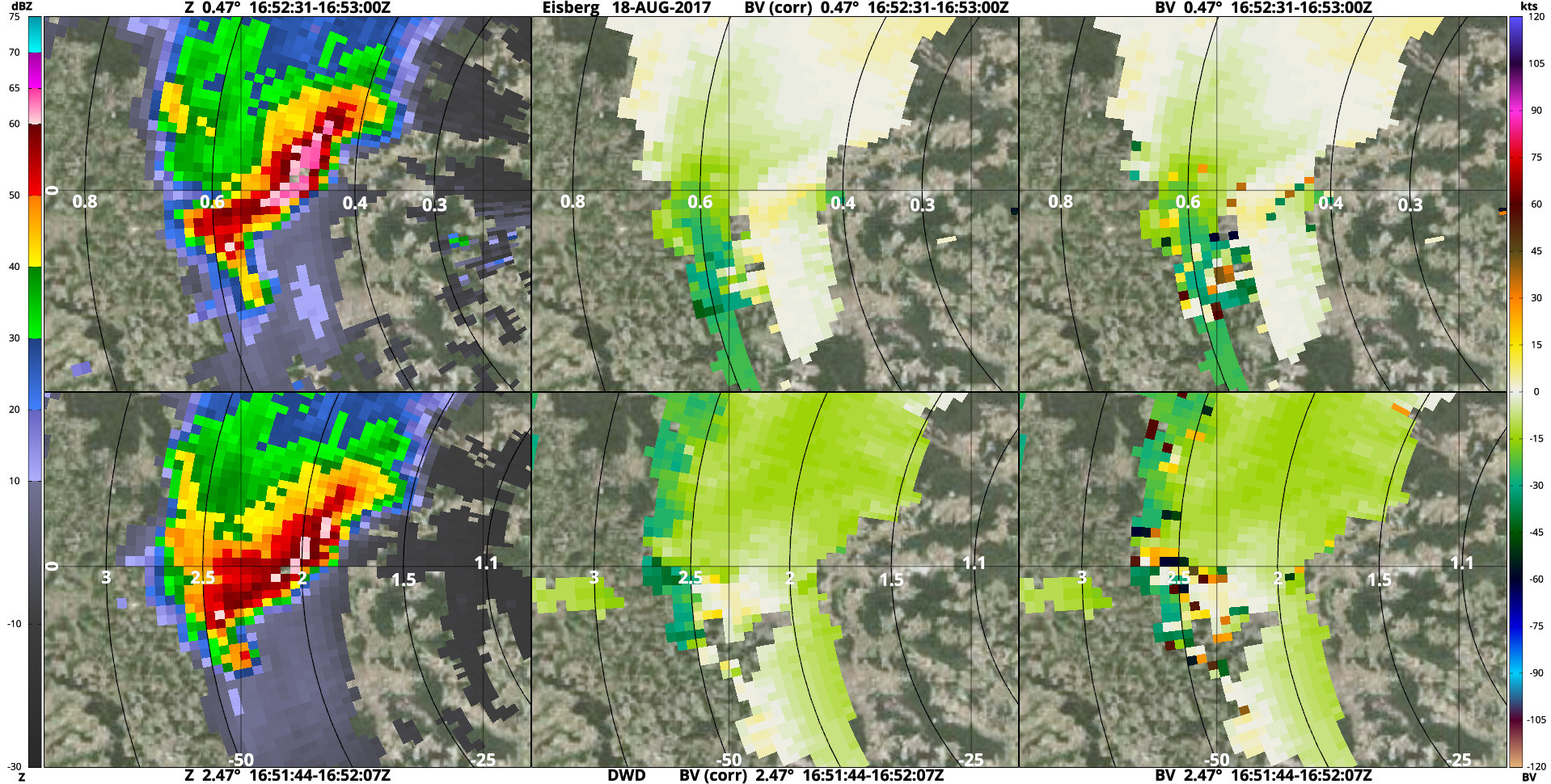 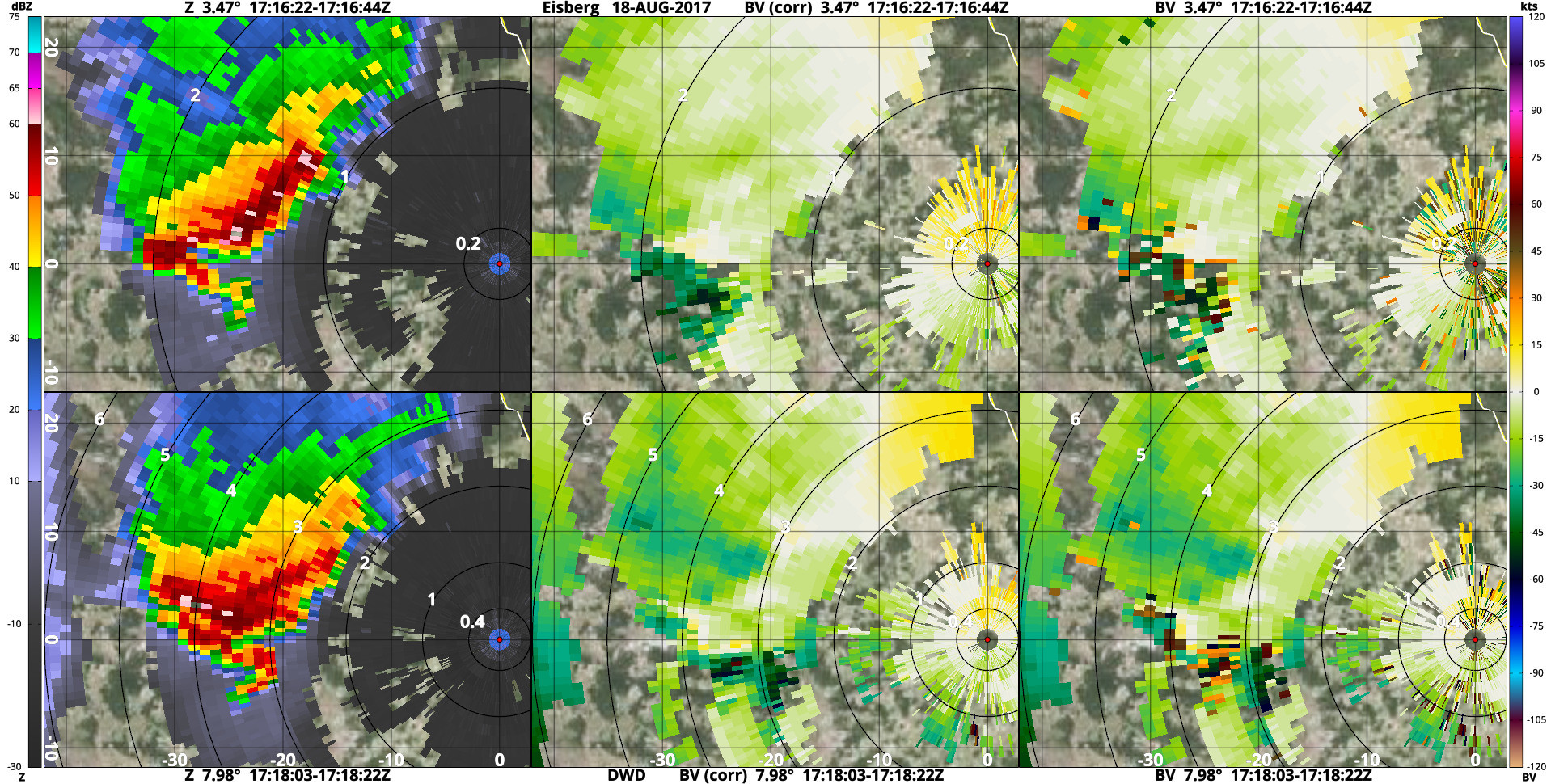 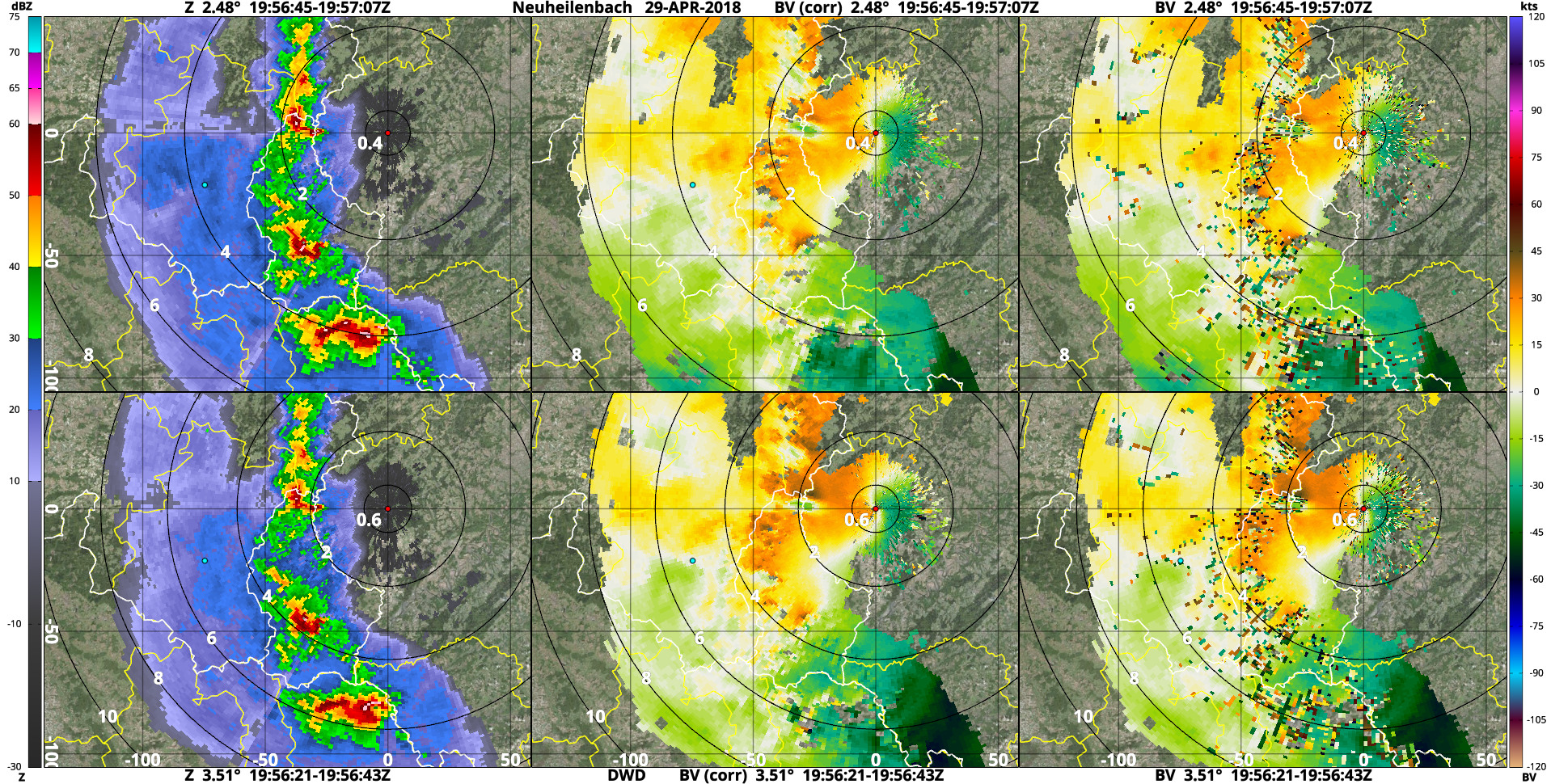 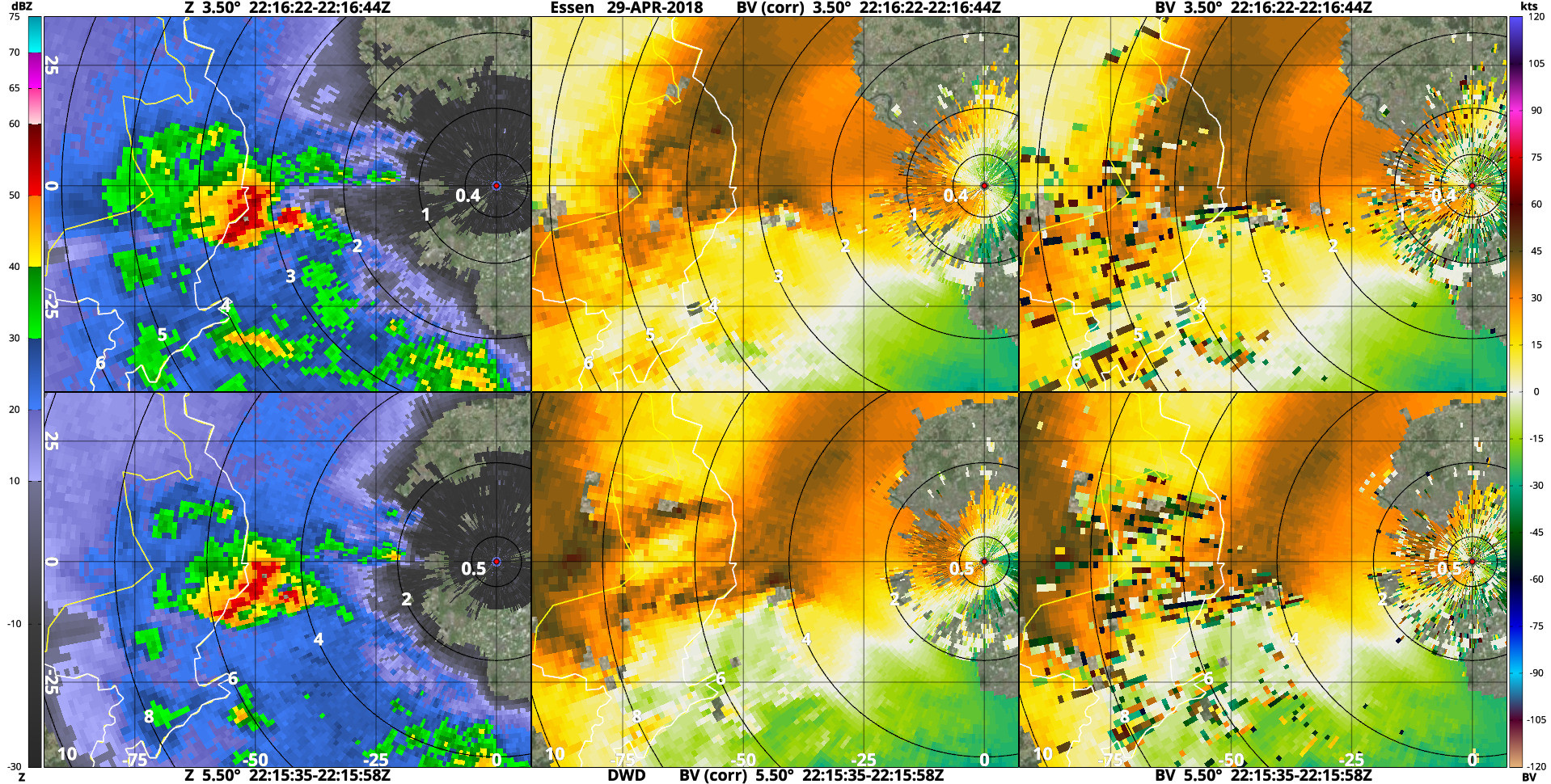 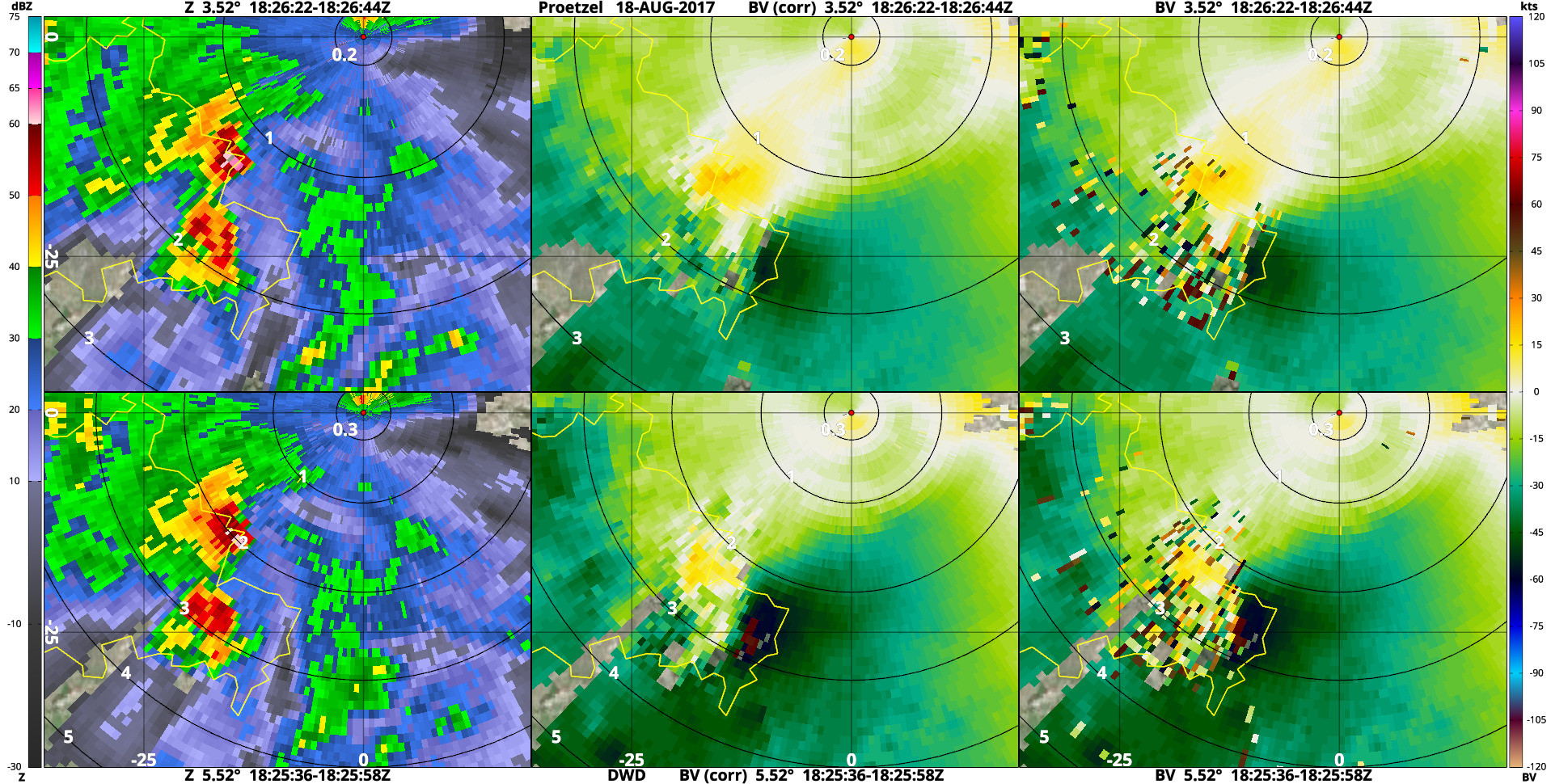 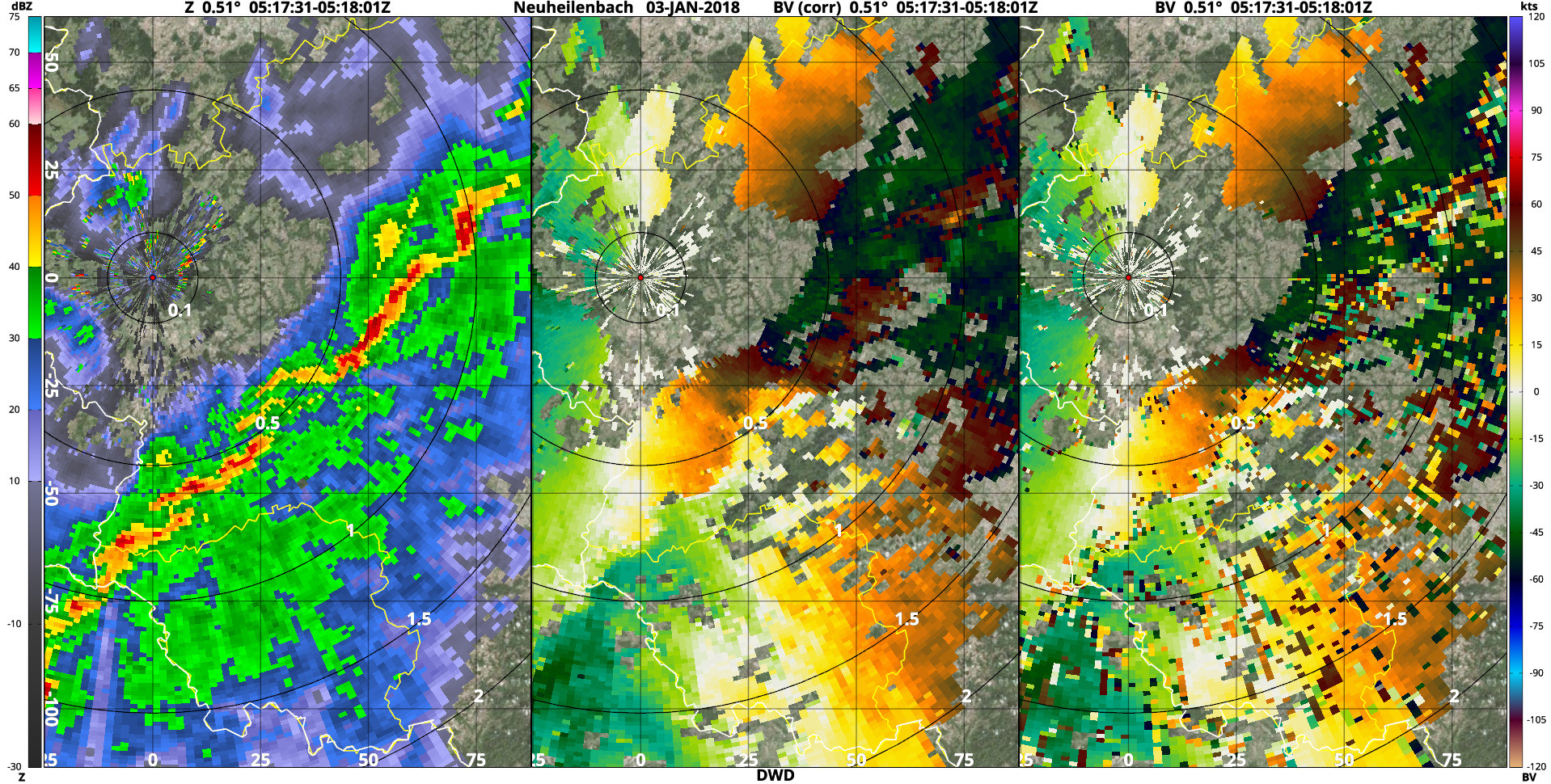 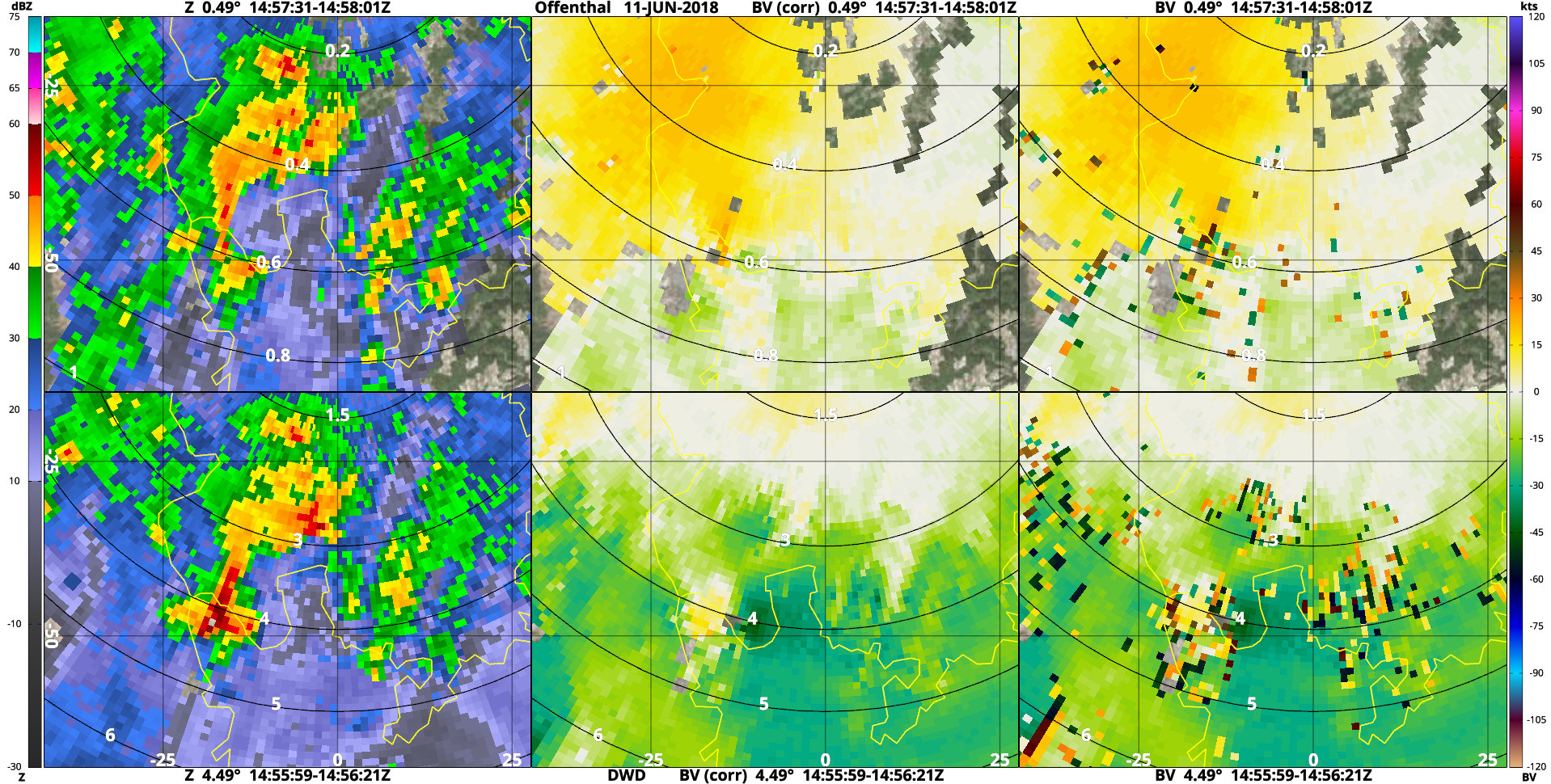